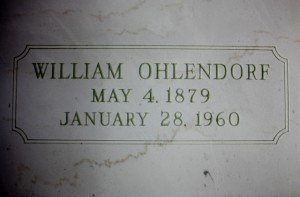 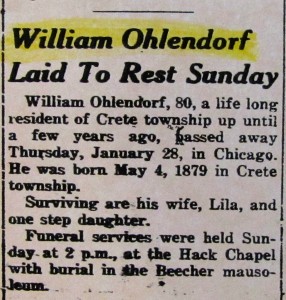 William Ohlendorf, 80, a life long resident of Crete Township up until a few years ago, passed away Thursday, January 28, in Chicago. He was born May 4, 1879 in Crete Township.

Surviving are his wife, Lila, and one step daughter.

Funeral services were held Sunday at 2 p.m., at the Hack Chapel with burial in the Beecher Mausoleum.

We can tell you that William was a farmer in Crete and remained unmarried through 1942, according to his WW2 registration and his brother Gustav’s obituary.

In 1955, William was living in Tice, Florida according to his brother Gustav’s obituary.

Can you help us identify his wife and step-daughter?

William has no immediate family resting in the mausoleum