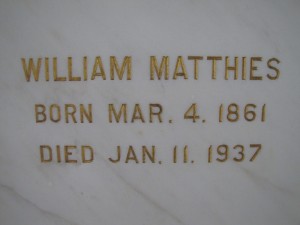 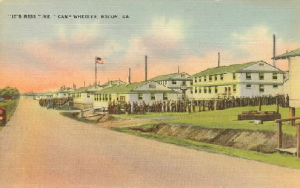 Herman Hunte, son of Mr. and Mrs. Henry Hunte, was called in the Kankakee County call, last week, and left, Monday, with the Grant Park contingent for Kankakee, where they entrained with boys from a company for some southern cantonment, the place we were unable to learn. The Red Cross and citizens of Grant Park gave the boys a grand send off and farewell reception, Saturday evening, at which the Red Cross presented each of the boys with a sweater and complete kit. Herman is the third and last son in this family to be called, Albert and Carl having gone south a couple of weeks ago. 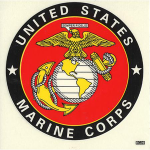 William was stationed: Barracks, Detachment, Naval Proving Ground, Indian Head, Maryland as a private in the U.S. Marine Corps. and his muster date was January 1919. 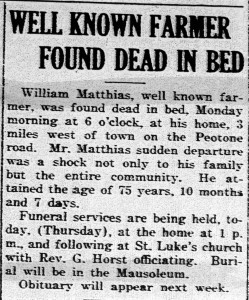 William Matthias, well known farmer, was found dead in bed, Monday morning at 6 o’clock, at his home, 3 miles west of town on the Peotone road. Mr. Matthias’ sudden departure was a shock not only to his family but the entire community. He attained the age of 75 years, 10 months and 7 days.

Funeral services are being held, today (Thursday), at home at 1 p.m., and following at St. Luke’s Church with Rev. G. Horst officiating. Burial will be in the Mausoleum.

The departed, William Matthies, Sr., son of Conrad and Engel Matthies, both deceased, was born, March 4, 1861, near Walnut Hill, west of Crete. The child of Christian parents, he was, soon after birth, baptized in St. Paul’s Church by the Rev. F.A.H. Lossner. On March 29, 1874, having been duly instructed in the fundamentals of the Christian religion, he was confirmed in the same church by the same pastor. Also in the same church, November 14, 1885, took place his marriage to Miss Emma Huenerberg, Rev. A. H. Brauer officiating. This happy union was blessed with the following children: Alvina, Mrs. Carl Clausing; William; Ida, Mrs. Ernest Hannover; Sophie, Mrs. William Buhr; Tillie, Mrs. Otto Jaeger, Detroit, Michigan; Malinda, Mrs. Martin Oldenburg; and Edward.

Immediately after their marriage, the young couple took up farming, during the first four years, three miles west of Beecher, then four years near Goodenow, and the last forty two years on the present homestead, three miles west of Beecher. Both being deeply interested and faithfully applying themselves to their work, their labors were signally blessed by God. Their farm today gives every evidence of the interest, care and toil expended upon it. Although for twenty five years handicapped more or less physically, the departed never played the role of an invalid nor lost his cheerful outlook on life. Even during the last two years, when his ailment became a burden and a cross, he retained his interest in the farm and its progress and remained the same kind, considerate husband, father and friend. Above all did he deeply appreciate the loving attention and help which, during a long period, was so untiringly given him by his wife and children. A pleasant interlude in his busy, fruitful life was the celebration of their Golden Wedding Anniversary in 1935, of which he often spoke in deep appreciation of the grace of God which so richly abounded in their lives. Thus his confession, which was also his farewell, clothed in the words “Was Gott tut, das ist wohlgetan” (What God does that is done well), should ever linger with his loved ones as a pleasant memory of him who was found so peacefully asleep, Monday morning, Jan. 11, at 5 o’clock, at the age of 75 years, 10 months and 7 days. Those who deeply mourn his passing are his wife, his children, already mentioned, 11 grandchildren, 3 great-grandchildren, and a host of other relatives and friends. 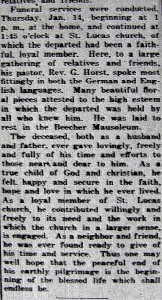 Funeral services were conducted, Thursday, Jan. 14, beginning at 1 p.m., at the home, and continued at 1:45 o’clock at St. Luke’s Church, of which the departed had been a faithful, loyal member. Here, to a large gathering of relatives and friends, his pastor, Rev. G. Horst, spoke most fittingly in the German and English languages. Many beautiful floral pieces attested to the high esteem in which the departed was held by all who knew him. He was laid to rest in the Beecher Mausoleum.

The deceased, both as a husband and father, ever gave lovingly, freely and fully of his time and efforts to those near and dear to him. As a true child of God and Christian, he felt, happy and secure in the faith, hope and love in which he ever lived. As a loyal member of St. Luke’s Church, he contributed willingly and freely to its need and the work in which the church in a large sense, is engaged. As a neighbor and friend, he was ever found ready to give of his time and service. This one may well hope that the peaceful end of his earthly pilgrimage is the beginning of the blessed life which shall endless be.

Note: You may notice that William’s and Emma’s names are spelled with an “e” in Matthies and their son Eddie’s name is spelled with an “a” in Matthias. I have found in my research the spelling changes on different documents. I do not know which is correct, or if there was an error made on their headstones. If you can help confirm the correct spelling, please let us know.