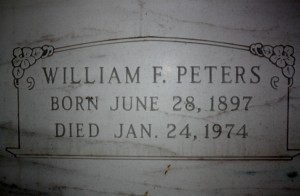 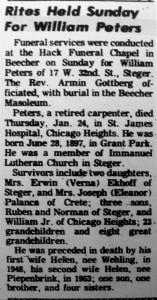 Funeral services were conducted a the Hack Funeral Chapel in Beecher on Sunday for William Peters, 17 West 32nd Street, Steger. The Rev. Armin Gottberg officiated, with burial in the Beecher Mausoleum.

Mr. Peters, a retired carpenter, died Thursday, Jan. 24, in St. James Hospital, Chicago Heights. He was born June 28, 1897, in Grant Park. He was a member of Immanuel Lutheran Church in Steger.