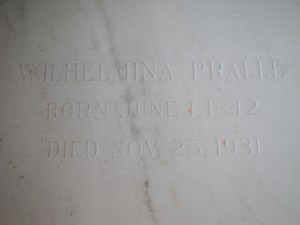 Can you help identify Wilhelmina’s fathers and brothers name?

Sister to William and a second brother Stradtmann.

Immigrated to America in 1856 with her parents and two brothers.

The departed, Mrs. Wilhelmina Pralle, nee Stradtmann, was born June 1, 1842, at Hildesheim, Germany. Being a child of Christian parents, she received the rites of baptism and after confirmation, at the age of 14 years, she, together with her parents and two brothers, immigrated to this country. Three years later, in 1859, she was married to Frederic Scheer, locating on a farm near Beecher. This happy union was blessed with four children, of whom one, Sophie, Mrs. Henry Freerking, preceded the mother in death more than thirty years ago. The three surviving children are Henry, Beecher; Louisa, Mrs. Henry Seitz, Beecher; and Frederic, of Dolton. The husband passed away in 1864, leaving the widow with her three children of tender age.

In 1867, she married a second time, her choice being Henry Pralle. This union was blessed with nine children, of whom two among these, Herman, at the age of 15, and Joan, 6 years ago, very suddenly preceded the mother in death. The surviving children of this marriage are: William, of Peotone; Louis, Beecher; Adolph, Crete; August, Peotone; and Lena, Mrs. Lena Balascher, of South Chicago Heights.

On June 3, 1894, she also suffered the loss of this husband. Thus often placed at the grave of dear ones, she, nevertheless found courage and strength in her Christian faith and hope to carry on for the sake of her children. (Henry Pralle is buried at St John UCC, Beecher, Illinois, USA)

Having lived six years just a little south of her son, Louis, she, in 1900, moved to Beecher in her newly erected home where she enjoyed many peaceful years surrounded by the tender love and care of her children. Beginning to feel the burden of old age, she found rare happiness in the presence of her son, Henry Scheer, who felt it his duty to live with his mother in order to give her the attention and care she needed. Failing rapidly, her end, nevertheless, came unexpectedly on Wednesday evening, at 9:30, at the age of 89 years, 5 months and 24 days. Those who mourn her departure are the children already mentioned and 75 grandchildren and great-grandchildren, and a large number of other relatives and friends.

Funeral services were held Saturday afternoon, beginning at 1 o’clock at the house and at 1:30 at St. Luke’s Church, where Rev. G. Horst spoke in both the German and English languages to a large number of relatives and friends. Many large, beautiful floral pieces, well deserved by Grandmother Pralle, attested to the love and esteem of her children and relatives. Burial was in the Beecher Mausoleum.

In the passing of Mrs. Pralle, an aged resident of Beecher community, a faithful loving wife and mother, and a true Christian character went to her final reward.