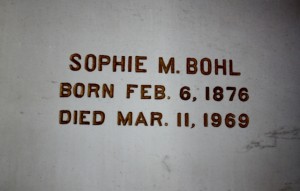 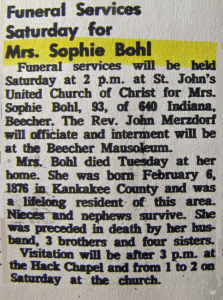 Funeral services will be held Saturday at 2 p.m. at St. John’s United Church of Christ for Mrs. Sophie Bohl, 93, of 640 Indiana, Beecher. The Rev. John Merzdorf will officiate and interment will be at the Beecher Mausoleum.

Mrs. Bohl died Tuesday at her home. She was born February 6, 1876 in Kankakee County and was a lifelong resident of this area.

She was preceded in death by her husband Henry on June 3, 1953, 3 brothers and four sisters.

Visitation will be after 3 p.m. at the Hack Chapel and from 1 to 2 on Saturday at the church.

Editors Notes: Heinrich Bohl Sr., Sophie’s father-in-law, lived with Henry & Sophie from the time of their marriage to the time of his death in 1921.