Help Is Coming For A Mausoleum Holding Beecher’s History.

Layers of dirt-gray grime and rust-colored water stains mar the Bedford stone exterior of the lone mausoleum in Beecher. The stained-glass windows that once added beauty and serenity to its facade are long gone, replaced by glass brick more suitable for a garage. 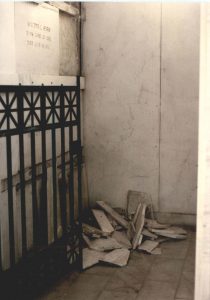 Inside, vandals have chipped away at some of the white Italian marble slabs that adorn its walls. Large chunks of peeling white paint hang from its vaulted ceiling. And the melted snow that seeps through its leaky roof in the winter often causes as much as an inch of ice to build up on its granite floor.

Such is the sorry condition of the neo-classical Beecher Mausoleum, a 150-foot-long and 50-foot-wide burial palace built 85 years ago by some of the founders of Beecher, in eastern Will County, to provide an above-ground resting place for more than 200 local souls.

But salvation may be on the way for the soon-to-be Will County landmark, just east of Illinois Highway 1 and south of Indiana Avenue on the southeast edge of Beecher, next to St. Luke’s Cemetery in unincorporated Washington Township. A handful of preservationists in Beecher and elsewhere are trying to raise money to restore the huge mausoleum to its former grandeur.

Spearheading the drive is Sandra Thielman, 41, a Richton Park native now living in Wonder Lake in McHenry County. Her great-grandfather, Henry Thielman, a turn-of-the-century real estate speculator in Beecher, was one of the men responsible for building the 210-crypt mausoleum in 1913.

“I went to visit the mausoleum two years ago and was appalled by the condition I found it in,” said Thielman, who has four other relatives among the 171 people entombed in the mausoleum.

With the help of a handful of Beecher-area residents, including Howard Paul, the town’s unofficial historian, Thielman has raised about $9,000 of the $50,000 to $100,000 she said is needed to restore the structure. The donations have come from relatives of people entombed in the mausoleum. But if the project is to be successful, the bulk of the money, she said, will have to come from individuals, agencies, or institutions interested in preserving landmarks.

“Howard Paul and I did as thorough a job of tracing the families of those entombed in the mausoleum as we could and we’ve solicited donations from just about every living relative we’ve found so far,” said Thielman, who has spent several hundred dollars of her own money to make cosmetic repairs to the mausoleum.

“But to do the job right, we’re going to need a lot more funds and donations of building materials to undertake restoration,” she said.

Thielman is hoping to gather volunteers at the mausoleum the weekend of June 20 to begin restoration of the structure and clean up the area. Those willing to give of their time, donate materials or make a monetary donation toward the restoration effort can contact Thielman at 815-728-8318. All donations are being held in an account set up at the First Community Bank and Trust in Beecher.

The restoration effort got a major boost last week from the Will County Historic Preservation Commission, which voted unanimously to recommend that Will County declare the mausoleum a county landmark. The County Board is expected to approve the declaration at its next regularly scheduled meeting March 19.

According to David Dubois, a planner in the Will County land use department, the mausoleum warrants landmark status because it is part of the history and culture of Beecher and Will County, it has architectural significance, and it was designed and built by local individuals.

Landmark status for the structure will make it illegal for anyone to undertake major alterations or demolition without prior approval of the county’s Historic Preservation Commission, Dubois said.