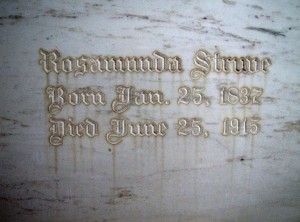 When eighteen years of age William Struve went west to the Mississippi river and for two or three years engaged in buying wood and selling it to steamboats. He found this to be quite profitable and when twenty-one years of age he returned to Sheboygan and sold his land, after which he bought lumber which he shipped by vessel to Chicago and thence on the Illinois Central, which had just been completed, to Monee. In this place he established the first lumberyard and engaged in business there for fourteen years. He likewise bought lots in the village and also bought and sold farms, and his real estate manipulations as well as in his commercial interests met with success. 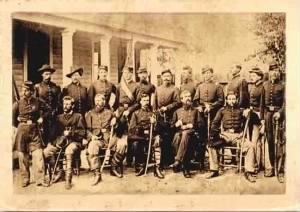 In July, 1862, he answered the call for volunteers to aid in suppressing the rebellion, enlisting in Company D, Eighty-second Illinois Volunteer infantry, known as Hecker’s Regiment. He participated in the memorable march to the sea and was a faithful and valorous soldier. He was mustered out and honorably discharged at the close of the war in June, 1865.  About 1869 or 1870, he removed to Beecher, which had just been established following the building of the Chicago & Eastern Illinois Railroad. Here he established a lumberyard and conducted it for twenty-five years, when he turned the business over to his son. While not a member of any church, he attended and contributed liberally to its support. In politics, he was a republican, and he took an active interest in advancing the welfare and growth of the party but never sought or desired office for himself. He was a good businessman and one well educated. While in Wisconsin, he worked for his board and the privilege of attending school.  He was anxious to learn the English language and he not only mastered the text books, but read much beside. He also taught school in that state after returning from the west. In his business life he eagerly improved his opportunities, making steady advancement along well directed lines of labor, and as the years passed he became a prosperous citizen. He died December 1, 1894, and is still survived by his widow.

Mrs. Struve bore the maiden name of Rosamond (correction: Rosamunda) Van Jordens and was born near Dusseldorf, Germany, January 25, 1837. When twelve years of age she accompanied her parents on their immigration to America, the family settling at Manitowoc, Wisconsin. Her father, Peter Van Jordens, became a farmer and lived at Manitowoc until his death. On the 4th of June, 1857, the daughter gave her hand in marriage to William Struve and went to Monee with her husband, who had been in business there for some time. She is still living in a comfortable cottage in Beecher, and is a member of the Roman Catholic Church, in the faith of which she was reared. Unto Mr. and Mrs. Struve were born five children. Rose, a sister older than our subject, died at the age of twenty-four years, while three younger children died in infancy.

Mrs. Wm. Struve Entertains in Honor of Her 72nd Birthday

Parlors Were Beautifully Decorated With Carnations

A large number of friends gathered at the home of Mrs. Wm. Struve, Monday afternoon to assist in celebrating her seventy-second birthday. 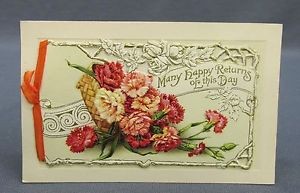 example of a 1909 Birthday Card

The parlors were beautifully decorated with carnations, and each guest was presented with one of the flowers as a remembrance of the occasion. Visiting was the nature of the pastime, talking over reminiscences of the past. An elaborate and delicious luncheon was served at 5 o’clock, after which the friends departed for their respective homes.

FUNERAL HELD SUNDAY AT THE HOUSE WITH BURIAL AT THE MAUSOLEUM

SERVICES WERE LARGELY ATTENDED AND WERE VERY IMPRESSIVE 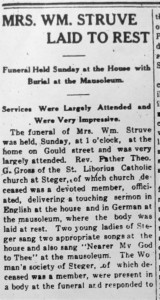 The funeral of Mrs. William Struve was held, Sunday, at 1 o’clock, at the home on Gould Street and was very largely attended. Rev. Father Theo. G. Gross of the St. Liborius Catholic Church at Steger, of which church the deceased was a devoted member, officiated, delivering a touching sermon in English at the house and in German at the mausoleum, where the body was laid to rest. Two young ladies of Steger sang two appropriate songs at the house and also sang “Never My God to Thee” at the mausoleum. The women’s society at Steger, of which the deceased was a member, were present in a body at the funeral and responded to the prayers both in German and English. The home and mausoleum were filled with relatives and friends, many from far away, to listen to and observe the impressive ceremony. 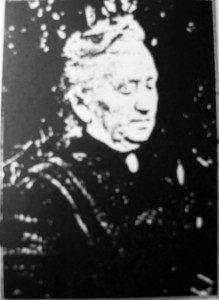 The floral offerings were very elaborate and beautiful and were tokens of esteem in which Mrs. Struve was held.

Rosamunda Jordan (correction: Van Jordens) was born January 25, 1837, at Klembroich, Prussia, Germany. When 10 years old, in 1847, she came with her parents to America, settling at Manitowoc, Wisconsin. On June 4, 1858, she married at Manitowoc to William Struve, moving to Monee, Illinois the same year. In 1872, forty three years ago, they moved to Beecher, where Mr. Struve embarked in the lumber business and was station agent, continuing in business up to the time of his death in December, 1894. He was said to be one of Beecher’s pioneer business men, highly respected and honorable in all his business transactions, through which traits he had amassed considerable wealth. Five children were born to Mr. and Mrs. William Struve, three of whom died in infancy, and Rosa, who died when 23 years of age on a train to Texas, where she was bound for her health. One son, Arthur, survives. Deceased is also survived by two sisters, Mrs. Bertha Kihm of Milwaukee, Mrs. Gruhle of Techny, an adopted daughter, Mrs. Paul Weigand of St. Augustine, Florida, daughter-in-law, Mrs. Arthur Struve, a grand-daughter, Miss Rosamond Struve, and a host of other relatives.

About five weeks before the end came, Mrs. Struve was stricken with illness and during her whole time of illness she was given the best of care medical skill could afford, and was cared for by a trained nurse, but all in vain, and she slowly lost strength until last Friday morning when she passed away in a quiet sleep. She bore her suffering, if any she had, to herself, always cheerful to the end.

In her demise, the son has lost an affectionate and kind mother, the community a venerable lady of excellent traits and a woman who had no known enemies. She was of beautiful disposition, always kind and cheerful to all, and was an ideal Christian in the Catholic faith. She was a very charitable lady, and many times has aided the poor to the knowledge of many, and more times that will never be known. Her sunny disposition made her steadfast friends and it can be honestly said of her that she never knowingly offended a person with whom she came in contact.

Rosamunda’s family members also resting in the mausoleum are: