One Of Beecher’s Landmarks Sad Reminder Of Grand Past 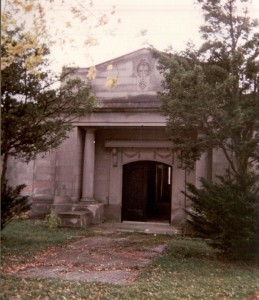 A check of newspaper files brought us to the June 19, 1914, issue of the Beecher Herald which headlined the dedication of the “magnificent mausoleum attended by fully 500.”

The article told how the crowd began to gather early in the afternoon to look over the beautiful structure, both inside and outside. Henry Thielman and A. Struve, the promoters and builders, were kept busy showing and explaining to the guests the features of this “practical and sanitary mode of burial, which is becoming more popular in cities and towns all over the United States.”

The speaker was Dr. M.R. Miley, who gave a history of the mausoleum, dating back to more tha 300 B.C. He also gave the history in detail of the Beecher Mausoleum, giving the approximate amount of material used in the construction, the length of time and number of men used in the work and an idea of the cost of the building.

Looking back to the Dec. 5, 1913, issue of the Beecher Herald, the description was detailed. “The work of placing the Bedford stone is about finished and aside from trimming to be done by the stone cutter, will be finished tomorrow. A carload of marble arrived this week and the marble setters are busy placing it. It will take them about size weeks to complete their work. Then comes the decorators, who will put the finishing touches in oil on the ceiling.”

The articles continues: “The art glass windows have arrived and many of them have been placed which gives the building a sort of finishing touch even now. The large bronze doors, costing alone $500, have arrived, but of course, will not be hung until the building is about finished.”

“When completed,” the article continues, “Beecher will have one of the prettiest and most costly community mausoleums in existence for a town of its size. Every bit of the material used is of the very best and the finishing will be of the most elaborate.”

If you have see the mausoleum lately, reading this report thus far has saddened you. But read on. “A feature of the building is its durability. There is not a piece of wood in the whole construction. The floor is of reinforced cement, the walls of the best hardened tile and cement reinforced with steel and the crypts are all of re-inforced cement. The Bedford stone is the heaviest ever used in any mausoleum of its size, and the whole building is constructed so as to be as near everlasting as can be conceived at this age.”

The Jan. 16, 1914, issue reports: “The work of setting the marble has been a long and tedious job, owing to the necessary exactness of the fitting and the extreme delicate work in placing it. The white marble however, gives the interior an immaculate and rich appearance. After it has been placed, each piece must be wiped and polished by hand, which when completed has a prefect clear surface.

The question now is “who is responsible for the building?” Windows are broken and that beautiful marble mentioned in the early articles is, in some places, in pieces on the floor. It apparently is used as a place for loitering as evidenced by empty beer cans. The speakers at the dedication ceremony congratulated the people of Beecher and community on having such a magnificent mausoleum. Does anyone know if there is a fund set up for maintenance, and if so, who is in charge?

Here’s some photo’s showing the condition

of the mausoleum and the vandalism which occurred in 1986 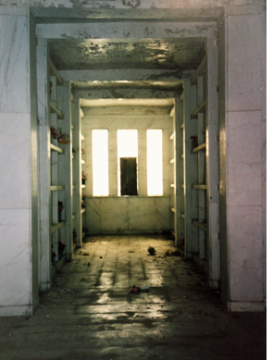 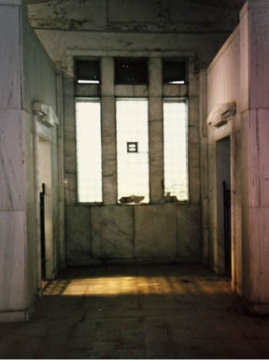 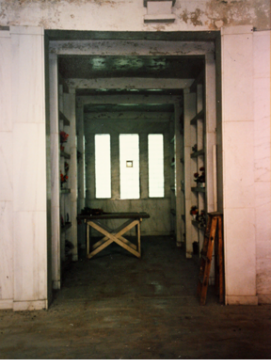 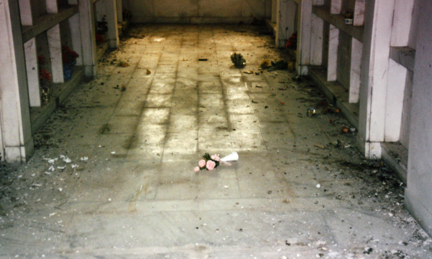 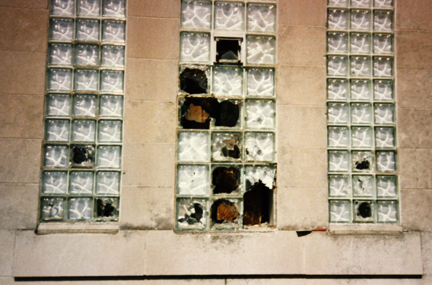 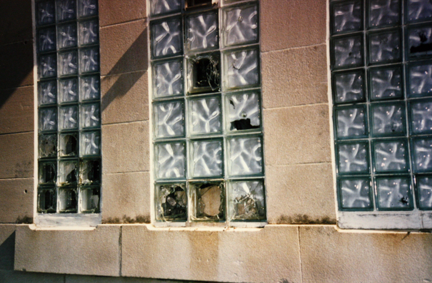 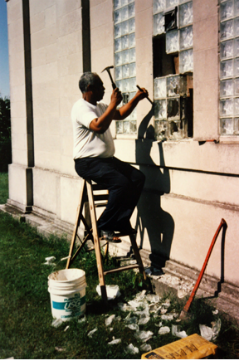 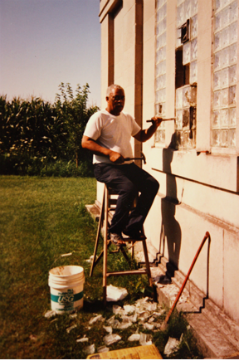 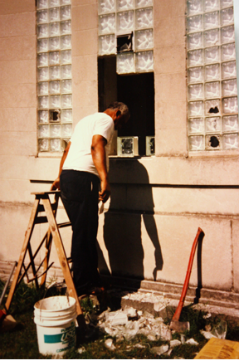 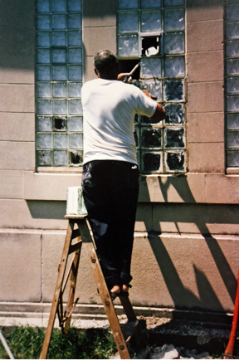 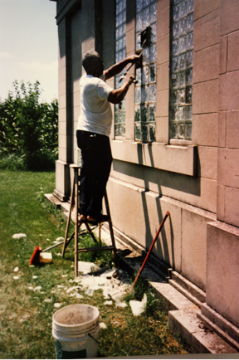 Did you notice the different types of glass blocks in the one window?

This was not the first time, nor the last time vandals destroyed the windows!