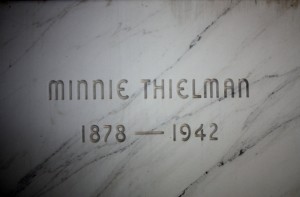 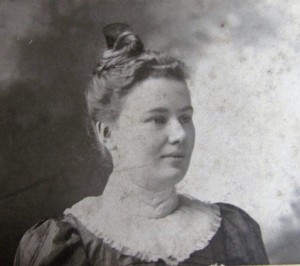 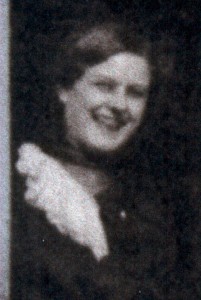 Mr. and Mrs. H.F. Thielman entertained about sixty of their friends, Tuesday evening, at their beautiful home at the corner of Hodges and Reed Streets. The printed cards which were sent invited the receivers to “come and grab a piece of fun,”  and in accordance they all came with both “grabbers,” and each vied with one another in the effort to grab the biggest piece. Games, word contests and various other amusements were indulged in to pass the time away. Every minute was fun and every guest mingled in the fun. In the word contest there were two divisions – the letters composing the names of a great man, and the making of as large a number of words from the letters in a given time. Mrs. Arthur Struve and Mrs. Frank Hunte were tied for the honors of discovering the name of the great man – Henry Thielman – and drew cuts to ascertain the winner, Mrs. Hunte coming out victorious and received a handsome china plate as the prize. Mrs. Arthur Ehrhardt wrote the largest number of words and received a beautiful mustard cup as a prize. Gus. Hoff and Christ. Eskilson were tied for “booby” prize, and they, too, were compelled to draw cuts. Mr. Eskilson won out and was presented an alphabet book. At about midnight the guests were seated at a banquet spread in the basement, where a most bounteous repast was partaken of. After the feast the guests were escorted to the beautiful parlors where more fun, music, both vocal and instrumental, and general mirth prevailed. It was one o’clock before the party broke up and each member bid Mr. and Mrs. Thielman as having an enjoyable time. Mr. and Mrs. Thielman are royal entertainers. 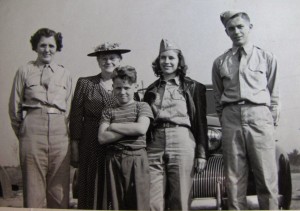 The departed, Mrs. Henry Thielman, nee Minnie Bielfeldt, daughter of Simon and Augusta Bielfeldt, both deceased, was born in Beecher, May 13, 1878. Soon after birth she was received into the family of the children of God through the holy rites of Baptism in St. Paul’s Ev. Lutheran Church, northwest of Beecher. Later, having received the customary instruction in the great fundamentals of the Christian religion, she was confirmed with others in St. John’s Ev. and Reformed Church, southeast of Beecher by the late Rev. G. Koch. 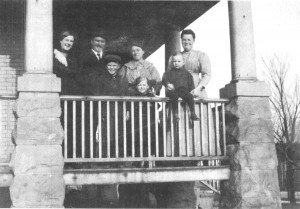 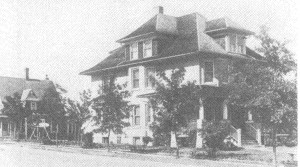 Immediately after marriage the young couple built and for fifteen years resided in their new home on the corner of Reed and Hodges streets. After which the family in 1916 became residents of the city of Stuttgart, Ark. From here, in 1928, they returned to Illinois making Chicago Heights their home.

The departed, who during her formative years enjoyed the blessings so lovingly and richly bestowed upon her in the late Henry Hack family, where she was regarded as a daughter, and who through many years knew no ill or ail, and gladly accepted and performed the many labors which fell to her lot, was given a severe blow to her physical health in  contracting tularemia which gradually undermined her health and so affected her most vital organs that a heart attack on May 13, in spite of all medical skill and loving care, resulted in her peaceful death, Tuesday, June 23, at 9 p.m. at the age of 64 years, 1 month and 9 days. She leaves to mourn her departure, her husband, the children already mentioned, two daughters-in-law, one son-in-law, four grandchildren, four brothers, John, Herman, Albert, Grover and a host of other relatives and friends.

Funeral services were conducted, Friday, June 26, beginning at 2 p.m., at the Hack Funeral Home, where Rev. G. Horst spoke fittingly to a large number of relatives and friends. Two duets by the sisters, Mrs. Herman Seitz and Mrs. Irvin Albers, greatly enhanced the services. Many beautiful floral pieces spoke eloquently of the high esteem in which the departed was held by all who knew her. She was laid to rest in the Beecher Mausoleum.

The deceased, gifted and blessed with many fine traits of character, and ever true to her religious training and essential worthwhile things of life, highly esteemed by her many friends, will above all be cherished in loving remembrance by those with whom her life was so intimately interwoven and to whom she gave so unstintingly of her time and care. Thus we may hope that she, having followed the light of life here, may now forever joyfully realize those things that our Heavenly Father has prepared for those who love him.