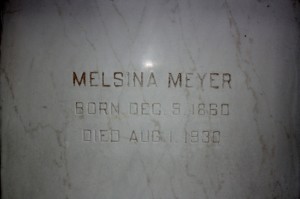 Melsina Catharine Louise Meyer, nee Fiene, was born December 9, 1860, in the neighborhood west of Chicago, where her parents Fr. (Friedrich) Fiene and his wife lived at the time. Later when they moved into the neighborhood of Beecher they joined the St. John’s Church. Here in 1874, she was confirmed by Rev. E. Keuchen. In 1896, she was united in holy wedlock to Ferdinand Engelking, who died in 1894, leaving her a widow with four small children. After a widowship of one year and a half, in July, 1896, she entered into matrimony with Henry Meyer. To this union three children were born, two of whom died in infancy.

Mrs. Meyer has been ailing in health for several years, yet by her sunny disposition the burden was borne with a real Christian spirit. About a year ago, her health began to fail rapidly, and more so since early spring. Only for nine days was she favored to live in the beautiful new bungalow (139 Dixie Highway, Beecher, IL) which her husband built the past months. Visibly her condition became lower and at 5:20 p.m., August 1, she closed her eyes peacefully forever on this earth. She brought her age to 69 years, 8 months and 8 days.

Her departure is mourned by her husband and his son, Harry, and by her two daughters and two sons of her first union: Mrs. Gustav Dierking, Beecher; Mrs. Sophie Farrenkopf, Harvey; Karl Engelking, Beecher; and Fritz Engelking, Grant Park, besides 14 grandchildren, one sister; Mrs. Sophie Grages, Beecher, and one brother, Fred Fiene of Wells, Minnesota.

The funeral services were held on Monday, August 4, at the St. John’s Church, conducted by Rev. C. Nauerth, who spoke both in German and English words of comfort to the bereaved ones and exemplifying to the multitude her Christian character. The Ladies Aid Society sang two songs for their departed member. The pall bearers were Frank Hunte, Paul Adolph, Henry Deeke, Henry Bohl, Ed. Rehborg and Ed Grages. Interment took place at the Beecher Mausoleum.

Melsina’s family members also resting in the mausoleum are: