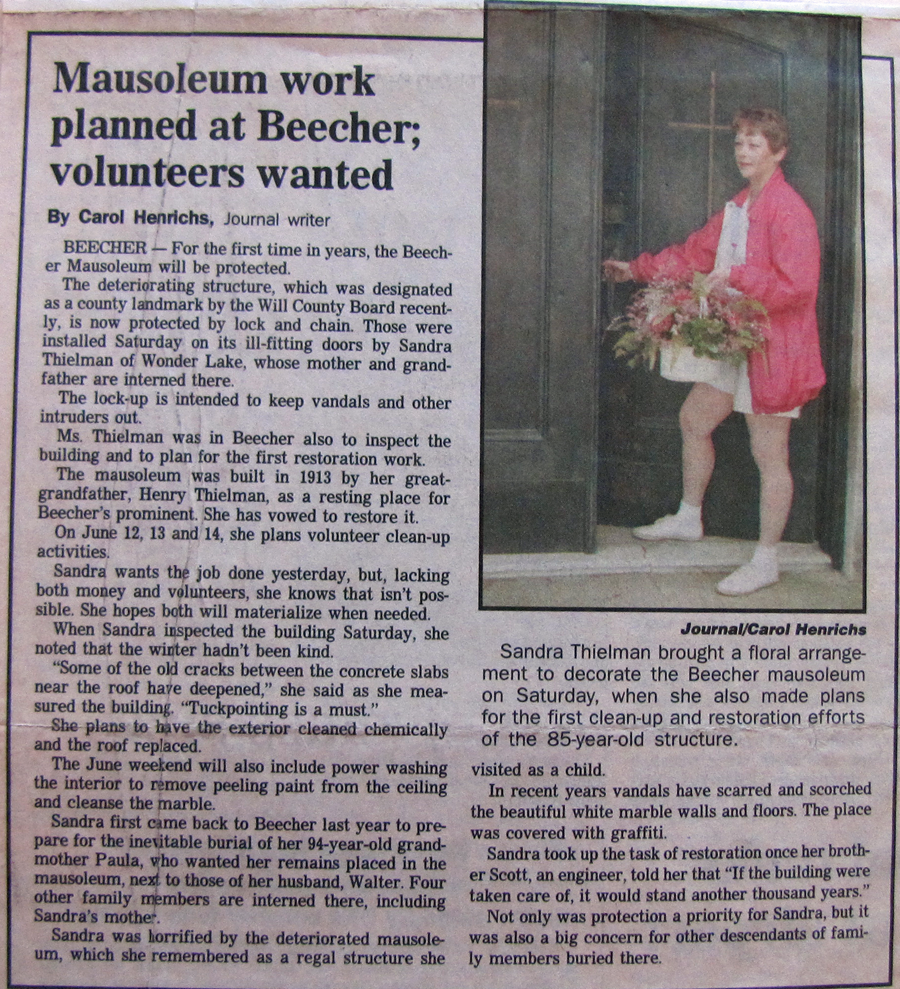 BEECHER – For the first time in years, the Beecher Mausoleum will be protected.

The deteriorating structure, which was designated as a county landmark by the Will County Board recently, is now protected by lock and chain. Those were installed Saturday on its ill-fitting doors by Sandra Thielman of Wonder Lake, whose mother and grandmother are interned there.

The lock-up is intended to keep vandals and other intruders out.

Ms. Thielman was in Beecher also to inspect the building and to plan for the first restoration work.

The mausoleum was built in 1913 by her great-grandfather, Henry Thielman, as a resting place for Beecher’s prominent. She has vowed to restore it.

Sandra wants the job done yesterday, but, lacking both money and volunteers, she knows that isn’t possible. She hopes both will materialize when needed. When Sandra inspected the building Saturday, she noted that the winter hadn’t been kind.

“Some of the old cracks between the concrete slabs near the roof have deepened,” she said as she measured the building. “Tuckpointing is a must.”

She plans to have the exterior cleaned chemically and the roof replaced.

The June weekend will also include power washing the interior to remove peeling paint from the ceiling and to cleanse the marble.

Sandra first came back to Beecher last year to prepare for the inevitable burial of her 94-year-old grandmother Paula, who wanted her remains placed in the mausoleum next to those of her husband, Walter. Four other family members are interned there, including Sandra’s mother. Sandra was horrified by the deteriorated mausoleum, which she remembered as a regal structure she visited as a child.

In recent years vandals have scarred and scorched the beautiful white marble walls and floors. The place was covered with graffiti.

Sandra took up the task of restoration once her brother Scott, an engineer, told her that “If the building were taken care of, it would stand another thousand years.”

Not only was protection a priority for Sandra, but it was also a big concern for other descendants of family members buried there.