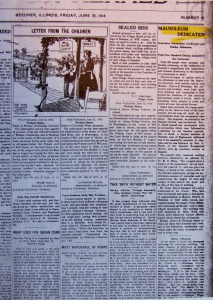 Fully 500 people were present, last Sunday afternoon, at the dedication of Beecher’s magnificent new mausoleum and listened attentively to the impressive ceremonies in detail.

The crowd began to gather early in the afternoon to look over the beautiful structure, both outside and in, and Messrs. Struve & Thielman, the promoters and builders, were kept quite busy showing and explaining to their guests the features of this practical and sanitary mode of burial, which is becoming more popular in cities and towns all over the United States.

Seats were provided for a large gathering on the lawn in front of the mausoleum, but not near all could be accommodated when the ceremonies took place. The program, as printed in the Beecher Herald was carried out by Rev. G. Horst who opened the ceremonies with an invocation, which was followed by a selection by the Beecher Quartet. Rev. G. Koch, a former minister of Beecher, now of Englewood, delivered one of his masterful sermons in German, and he was followed by Rev. G. Horst of the Evangelical Church with an excellent sermon in English.

The quartet then rendered another selection, followed by an address by Dr. M.R. Miley. The speaker gave a history of the mausoleum, dating back over 300 years B.C., and also gave the history in detail of the construction of the Beecher Mausoleum giving the approximate amount of material used in construction, the length of time and number of men used in the work and an idea of the cost of building.

Mr. Rose, who is manager of a large mausoleum at La Crosse, Wisc. was then introduced and spoke a few words of congratulations to Messrs. Struve & Thielman in their achievement, also congratulating the people of the village and community on having such a magnificent mausoleum. The building was then dedicated by Revs. Koch and Horst, after which closed the ceremonies.

Messrs. Struve & Thielman desire to thank all those who attended and took part in the dedication ceremonies and helped make the event so grand a success in every way.