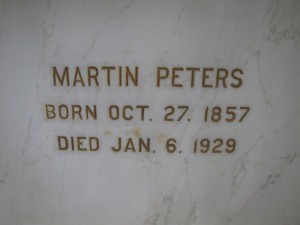 ACCIDENT ON THE MILWAUKEE ROAD

SPEEDER JUMPS THE TRACK AT CROSSING BETWEEN JUDY AND CRETE 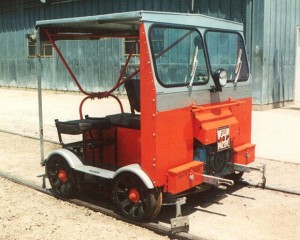 example of a railroad speeder car

While riding a speeder, this afternoon, Martin Peters and William C. Steadt were badly injured when the speeder jumped the track at a crossing, north-east of town, between Judy and Crete. It is not exactly known how the accident happened, but it is supposed that either a plank was loose at the crossing or a bar fell from the car and caused the derailment. The men were thrown violently to the ground.

The injured men were brought to their homes and Dr. Miley summoned who, upon examination, found that Mr. Peters had sustained a fractured wrist, a bad cut on the neck, which extended from ear to ear, was bruised about the chest, and otherwise injured. Mr. Steadt sustained an injury to the spine and also a badly bruised leg.

Just how serious the accident will determine we were unable, at this time, to learn.

Martin Henry Peters died at his home on Chicago Road, last Sunday morning, at 4:45 o’clock. For more than a week previous to his death, it had become apparent that his end was drawing nigh. During the last several days he was unconscious, taking neither drink nor food. His death was brought on by the consequences of a stroke suffered shortly after Thanksgiving day.

Mr. Peters was born October 27, 1857, at Klockzien, Mecklenburg-Schwerin, Germany. There he received the sacrament of holy baptism and later on, was confirmed in the Lutheran faith. On October 2, 1881 he was joined in holy wedlock with Friedarika Johanna Barmann at Berenshagen, Mecklenburg-Schwerin. In November 1884, the young couple emigrated to America and lived in Chicago during the first seven years. Then they moved to Beecher where they have lived ever since.

Mr. Peters never was a very robust man, but he labored faithfully at his chosen occupation and eked out a comfortable living for his family. Several years ago he suffered his first stroke and his strength failed him perceptibly.  Since spring of last year he failed very rapidly and finally succumbed at the age of 71 years, 2 months and 9 days.

The deceased is survived by the following near relatives; his sorrowing widow, 2 sons, 4 daughters, 4 sons-in-law, 2 daughters-in-law, 16 grandchildren and 1 great grandchild. His children are: Mrs. Ida Heldt of Lansing, Mrs. Frieda Piel of Monee, Rudolph Peters of Grant Park, Mrs. Emma Klemme of Petersburg, Mrs. Helen Engelking of Beecher and William Peters of Steger.

The funeral was held yesterday from Zion Ev. Lutheran Church, commencing at 1 o’clock at his late home. His pastor, Rev. William H.L. Schietz conducted the services. Interment was at the mausoleum.

Martin’s family members also resting in the mausoleum are: