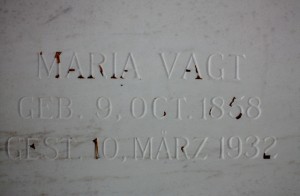 Wife of Carl Vagt, married in 1884 in Germany at the same church where they were both baptized and confirmed.

The departed, Mrs Carl Vagt, nee Unruh, was born Oct. 9, 1858, at Mecklenburg, Schwerin, Germany. As a child of pious parents, she received a very fine religious education, which proved a great blessing throughout her entire life. In 1884 she was married to Carl Vagt, the marriage taking place in the home church. Immediately after marriage they came to America, residing for a short period near Sollitt, Beecher and Brunswick, finally settling on a farm near Eagle Lake, where they remained for 19 years. From here they moved to Goodenow, living there for three years. In 1908, they moved to their newly erected home in Beecher, where for 24 years, they have permanently resided.

About ten years ago, 1922, the departed suffered a paralytic stroke from which she never fully recovered, although able to attend to her household duties. Four years ago she suffered another stroke which practically invalided her. During all this time, never a word of complaint passed her lips, always gratefully receiving and acknowledging the loving administrations of her husband, neighbors and relatives. About the end of April an attack of influenza almost brought her to death’s door, but contrary to all expectations, she recovered. But yet, just a week ago another stroke rendered her unconscious and it was soon apparent that she had but a day or two to live. On Thursday morning, at 1:40, she passed away at the age of 73 years, 5 months and 1 day. 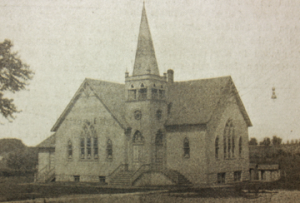 Funeral services were conducted on Sunday, at 1:30 at the house, and at 1:50 at St. Luke’s Church, where Rev. G. Horst spoke in both the German and English languages to a large gathering of relatives and friends. She was laid to rest in the Beecher Mausoleum.

In the passing of Mrs. Vagt, a loving and dutiful wife, who gladly shared the burdens and joys with her husband, an unassuming, devout Christian who faithfully attended the services whenever possible, went to her reward, She leaves to mourn, her aged husband, one brother, Fred Unruh, of Grant Park, and a large host of other relatives and friends.