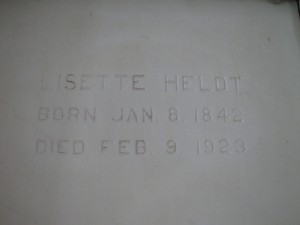 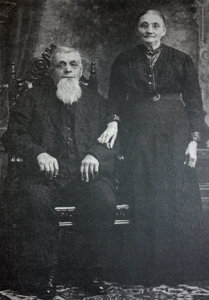 Mrs. Ernst Heldt, nee Lisette Stadt, was born January 8, 1842, at Rosenhagen, Amt Neubukow, Mecklenburg-Schwerin, Germany. In 1856, she together with her brothers and sister, came to America, dwelling amongst friends at Lombard, this state. On October 27, 1861, she was married to Ernst Heldt, which marriage was blest with ten children, two, Sophia and Lizzie, passing away in infancy, and Charles preceding her in death only last year. The surviving children are: William, Amelia (Mrs. Henry Seehausen), Emma, (Mrs. Henry Fick), Fred, Ernst, Louis and Robert. The family, after living at Lombard six years, came to Beecher, locating on a farm about two miles east of town, where they dwelled for thirty-eight years.

In 1906, Mr. and Mrs. Heldt left the farm and came to Beecher, acquiring a home on Indiana Street. On October 27, 1911, the couple in the midst of their children and relatives celebrated their golden wedding. On April 7, 1916, Mr. Heldt was called by death. Since that time Mrs. Heldt has made her home with her son Robert, where she enjoyed the eventide of her life, tenderly cared for by her daughter-in-law, who lovingly and faithfully assumed a daughter’s duties. Her strength gradually failing, due to old age, she on Wednesday afternoon, at 2 o’clock was obliged to take to her bed, which was destined to become her deathbed, passing out of this life on Friday morning at 7:50 o’clock, at the age of 81 years, 1 month and 1 day.

Besides the children, deceased leaves to mourn her departure one sister Frederika, (Mrs. Henry Schroeder) of West Union, Iowa; two brothers, Fred Stadt of Beecher, and Charles Stadt of Welcome, MN; thirty-seven grandchildren, eleven great grandchildren and a large number of other relatives and friends. 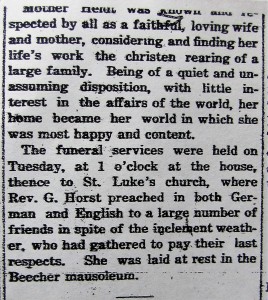 Mother Heldt was known and respected by all as a faithful, loving wife and mother, considering and finding her life’s work the Christian rearing of a large family. Being of a quiet and unassuming disposition, with little interest in the affairs of the world, her home became her world in which she was most happy and content.

The funeral services were held on Tuesday at 1 o’clock at the house, thence to St. Luke’s Church, where Rev. G. Horst preached in both German and English to a large number of friends in spite of the inclement weather, who had gathered to pay their last respects. She was laid to rest in the Beecher Mausoleum.

(Editor’s note: the second person claimed by the grim reaper in the obit was: Donald Dale Willard, the infant son of Mr. and Mrs. Gerhard Wehling Jr.)

Lisette’s family members also resting in the mausoleum are: