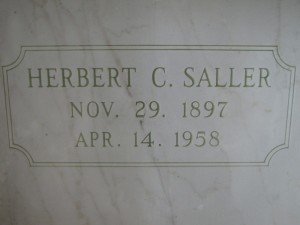 Herbert C Saller as a young man, prior to his marriage,  worked as a teamster for a coal company. On December 17, 1925, he was united in marriage with Dorothy Bahlman, daughter of Charles Bahlman of Bahlman Oil Co.

The community joins with family members in mourning the sudden death of Herbert C. Saller, 60, who passed away Monday afternoon, at about 3:30, at the Hazelcrest Hospital. He entered the hospital Friday night and submitted to surgery on Sunday.

Mr. Saller was born November 29, 1897, in Crete. He was a member of the Beecher Chamber of Commerce and the Beecher Sportsmen’s Club and held the position of manager of the Bahlman Sinclair Service Station.

Surviving are his wife, Dorothy; one daughter, Mrs. Charlene Graham of Beecher; two sons, Herbert F. of Chicago and William T. at home; four grandchildren; three sisters, Mrs. Alice Wilkening of Chicago Heights, and Miss Lenore Saller and Mrs. Adeline Hudson, both of Crete. He was preceded in death by his parents and one son in 1927.

Services will be held today at 2 p.m. at the Hack Chapel, Rev. Robert Kamprath will officiate with burial in the Beecher Mausoleum.

Friends may call until time of services. 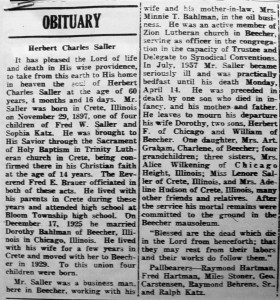 It has pleased the Lord of life and death in His wise providence, to take from this earth to His home in heaven the soul of Herbert Charles Saller at the age of 60 years, 4 months and 16 days. Mr. Saller was born in Crete, Illinois on November 29, 1897, one of four children of Fred W. Saller and Sophia Katz. He was brought to His Savior through the Sacrament of Holy Baptism in Trinity Lutheran Church in Crete, being confirmed there in his Christian faith at the age of 14 years. The Rev. Fred E. Brauer officiating in both of these acts. He lived with his parents in Crete during these years and attended high school at Bloom Township High School. On December 17, 1925 he married Dorothy Bahlman of Beecher, Illinois in Chicago, Illinois. He lived with his wife for a few years in Crete and moved with her to Beecher in 1929. To this union four children were born. 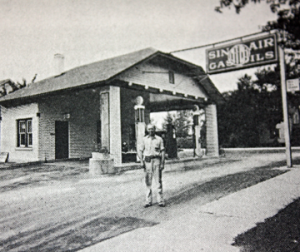 Mr. Saller was a businessman, here in Beecher, working with his wife and his mother-in-law, Mrs. Minnie S. Bahlman, in the oil business. He was an active member of Zion Lutheran Church in Beecher, serving as officer in the congregation in the capacity of Trustee and Delegate to Synodical Conventions. In July 1957 Mr. Saller became seriously ill and was practically bed-fast until his death Monday, April 14. He was preceded in death by one son who died in infancy and his mother and father. He leaves to mourn his departure his wife Dorothy, two sons, Herbert F. of Chicago and William of Beecher. One daughter, Mrs. Art Graham, Charlene, of Beecher; four grandchildren; three sisters, Mrs. Alice Wilkening of Chicago Heights, Illinois; Miss Leonore Saller of Crete, Illinois, and Mrs. Adeline Hudson of Crete, Illinois, many other friends and relatives. After the service his mortal remains were committed to the ground in the Beecher Mausoleum.

“Blessed are the dead which died in the Lord from henceforth; that they may rest from their labors and their works do follow them.”

Herbert’s family members also resting in the mausoleum are: