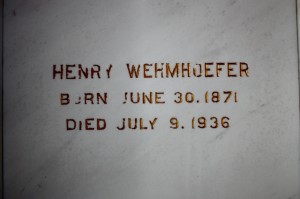 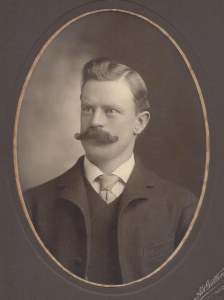 Son of William and Maria (nee Seegers or Siegert) Wehmhoefer 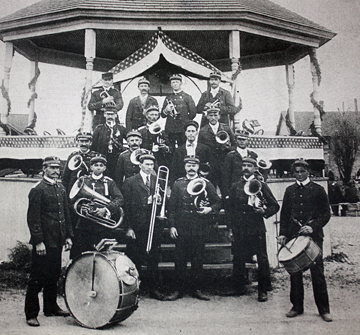 Compiled by A. Gordon, Publisher of Prospectuses for Towns on the C. & E. I. R. R. and Frisco Systems 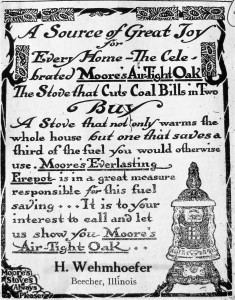 H. Wehmhoefer, Beecher’s leading hardware merchant, was born in Chicago, remaining in the city for twenty years, when he moved to Beecher. Ten years ago in August he started his hardware business, and it speaks well for its management that during all these years Mr. Wehmhoefer has had no competition. This fact is the highest monument to the liberal and honorable treatment always accorded by Mr. Wehmhoefer to his patrons, and though the rapid growth of Beecher is now introducing competitive business, Mr. Wehmhoefer may be counted on to retain his old patrons who have known him for years and who know him for what he is worth. Having lived in Beecher for 15 years and enjoyed the success that comes from a busy life, Mr. Wehmhoefer believes in Beecher and believes in Beechers’ institutions. He is one of the men who will do his part in bringing about a larger expansion of Beecher’s industrial activity. Mr. Wehmhoefer is one of the directors of the Eastern Illinois Brick company, the leading industry, and he would be among the first to welcome additional industries. He is unalterably opposed to any stand-still policy. In the matter of new educational facilities his vote is already recorded on the side of progress, and he will do his utmost to bring about the desired end. Mr. Wehmhoefer is a member of St. Lucas Church, and both he and his family take interest in all the social circles of the town.

In addition to his large hardware business Mr. Wehmhoefer is exclusive agent for many of the leading farm implement firms, including the Deering Company. In a word, the tenth year of the establishment of his business sees Mr. Wehmhoefer at the head of two of the most important business enterprises that an agricultural community can have, and it is the wish of his fellow-townsmen that he may long continue to attract people from far and near to the village of Beecher.

One of the Best Manufacturing Plants of its Kind

Supremacy in the brick industry was the goal of the incorporators of the Eastern Illinois Brick Company when the plant was established some three years ago (1902), and with the strength of purpose characteristic of Beecher push and enterprise, the business has been exploited until now this goal has been reached, and the euphonious slogan “Beecher for Brick,” is being surely raised as the banner cry of the brick industry. This is no vain or empty boast, for the company owns over thirteen acres of the finest brick land in the state, and, after some experimenting, the top notch has been reached in the product turned out. Every foot of the land is available, and the plant is being extended rapidly, more machinery is being installed, and, before the summer wanes, the plant will give employment to from 75 to 80 skilled workmen. At present the demand for Beecher Brick is in excess of the supply, but with the rapid growth of the works the facilities will soon be such as to meet all requirements.

The above is, in brief outline, a synopsis of the history of the Beecher brick industry.

The stock is all held by local capital, the leading business men of Beecher being the directors. The following are the officers:  Thomas Clark, president; Dr. Van Voorhis, vice-president; Arthur Struve, secretary and treasurer; Hendy Stade, superintendent. The directors consist of all the above with H.F. Wilke and H. Wehmhoefer.

In fact, the best brains and capital of the town is at the back of this industry, and the ambition of the company is to enlarge the meaning of the motto, “Beecher for Brick” into the higher and broader motto of “Beecher for Best Brick.”

Henry Wehmhoefer, son of the deceased William and Mary Wehmhoefer, was born in Chicago June 30, 1871. Being the child of fine Christian parents he was soon after birth, baptized by the Rev. Wagner in Zion’s Church, Chicago. When in the fall of 1884, his parents became residents of our community, ample opportunity was given the departed to complete a course in religious instruction at St. Paul’s Church, northwest of Beecher where, on March 29, 1885, he was confirmed by the Rev. A.H. Brauer. Filled with the enthusiasm, hope and energy of youth, he soon sought and found employment in Chicago, first as clerk in a wholesale grocery store and later as painter and decorator.

On September 24, 1895, he was united in holy wedlock to Miss Augusta Wehling, the ceremony taking place in Zion’s Evangelical Lutheran Church, Chicago, Rev. J.G. Nuetzel officiating. This happy union was blessed with four children, one of whom, Harold, in 1905, preceded the father in death. The surviving children, who together with the mother deeply mourn the loss of a loving husband and father are; Ethel, Mrs. Arthur Hack; and Lawrence and Howard, all of Beecher. 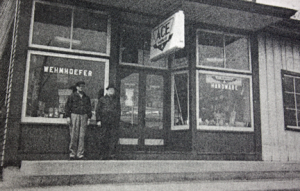 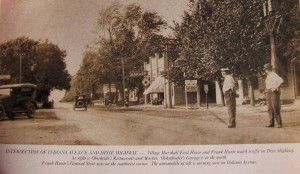 Immediately after their marriage the young couple established their home here in Beecher, where the departed bought and successfully operated the former Charles Hack hardware store. Gifted with rare business acumen he, 18 years ago, also acquired the Tatge garage on the Dixie Highway, which also proved a good investment.

About the same time he realized the fulfillment of a long cherished dream in calling a beautiful home on the northwest end of Gould Street his own. Because of his many sterling qualities and his deep interest in the welfare of the community which he had learned to love, he not only served as president of the School Board, but also for many years, up to the time of his death, as president of the Farmers State Bank, which positions of honor and trust he filled to the full satisfaction of all concerned.

Beginning to ail some six years ago his life gradually and increasingly became filled with intense pain and suffering. In his quest for relief and possible cure he consulted the best of medical skill here, and in many of the hospitals of Chicago, always bearing himself with Christian patience and fortitude. During all these years, when at home or in the hospitals, the best of loving attention and care and most skilled and untiring nursing was given him. This applies especially to his stay in the North Chicago Hospital, where he had stayed the longest and where he had gone again some five weeks ago when his suffering became almost unbearable. While there his ailment took a decided turn for the worse so that all hopes of recovery had to be abandoned. Fully realizing his critical condition, suffering patiently as always, his end in the presence of his family came peacefully Thursday, July 9, at 10:45 p.m., at the age of 65 years and 9 days.

Those who deeply mourn his departure are his wife, the children already mentioned, one son-in-law; one grandchild, Geraldine Hack; three sisters, Minnie, Mrs. H.F. Claus, of Beecher; Lydia, Mrs. L.S. Cole, of Steger; Clara, Mrs. Martin Peters, of Monee; one half-sister, Carrie Hoffman; one step-brother, John Hoffman, of Grant Park; and a host of other relatives and friends.

Funeral services were conducted, Sunday afternoon, beginning at 1:30 at the home and continued at St. Lucas Church, where his pastor, Rev. G. Horst, spoke fitting words of comfort in both the German and English languages. A temporary installment of a microphone and loud-speaker making it possible to reach the vast number of relatives and friends who had come to pay their last respects to an honored friend. The many beautiful floral pieces also evidenced the high esteem and regard in which the departed was held by all who knew him. He was laid to rest in the Beecher Mausoleum.

In the passing of Mr. Wehmhoefer whose high ideals, integrity, fair-mindedness, and uprightness ever evoked confidence and trust, the community has suffered a distinct loss. By his loved ones and immediate relatives he will always be remembered as a wonderful husband, father and brother, whose every thought and effort was centered upon their happiness and comfort. His house was his castle, and his family the choicest possession within that castle. As a most faithful and loyal member of St. Lucas Church, he always stood ready to do his share; his memory will be cherished by all who still believe in Church and Kingdom work as he did. His faith, hope and love, deeply anchored in God’s words, enabled him to live and prove himself a true child of God, of whom it may be well said, “Well done, thou good and faithful servant; thou hast been faithful over a few things, I will make thee ruler over many things. Enter thou into the joy of thy Lord.”