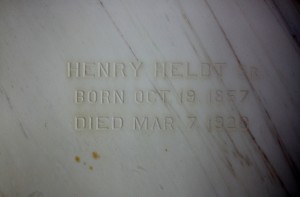 Henry’s wife Maria died before June of 1900, possibly in childbirth. We do not know where she is buried.

We do not have any articles or obituaries on Henry Heldt Sr.

The 1900 census lists him as a widowed farmer, age 42, Washington Township, Will County, IL. with his two children and sister-in-law; Lena Grages. Lena married William Matthies in 1902.

The 1910 census lists him as a farmer, age 52, widowed with his two children, Washington Township, IL USA.

The 1920 census shows him living with his son Henry Jr. and his wife Emilie Heldt, Yellowhead Township, Kankakee County, IL, age 62 and retired.

If you can help us tell the story of his life, please let us know.