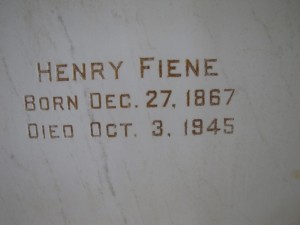 Funeral services were held in the Funeral Home at Harlingen, Texas, Friday, for Henry Fiene, former resident of the community, who passed away in Texas, Wednesday evening, Oct. 2, at the age of 77 years, 9 months and 5 days. The remains were brought to Beecher, and services were conducted by Rev. Helme of Blue Island in the Hack Funeral Home, after which burial was here Monday afternoon.

Mr. Fiene was born in Washington Township, Will County, Illinois, on the farm of his parents, the oldest child of Henry and Ida Fiene, Dec. 27, 1867. Here he was raised and received his public school education. He was instructed and confirmed in the Christian faith in St. Paul’s Lutheran Church, Petersburg. On April 14, 1895, he married Emma Ristenpart in St. John’s Evangelical Church, east of Beecher . Three children were born to this union, Linda, Reinhard and Rose. The mother of these children passed away, Aug. 23, 1919. On Aug. 29, 1923, Mr. Fiene was married to Mrs. Sievers. In 1930, he sold his farm and moved to Texas where he took up citrus farming in the Rio Grande Valley.  He enjoyed the climate, the country and the work, but looked forward to his periodical visits to Beecher. A stroke three years ago made it impossible for him to travel since that time.