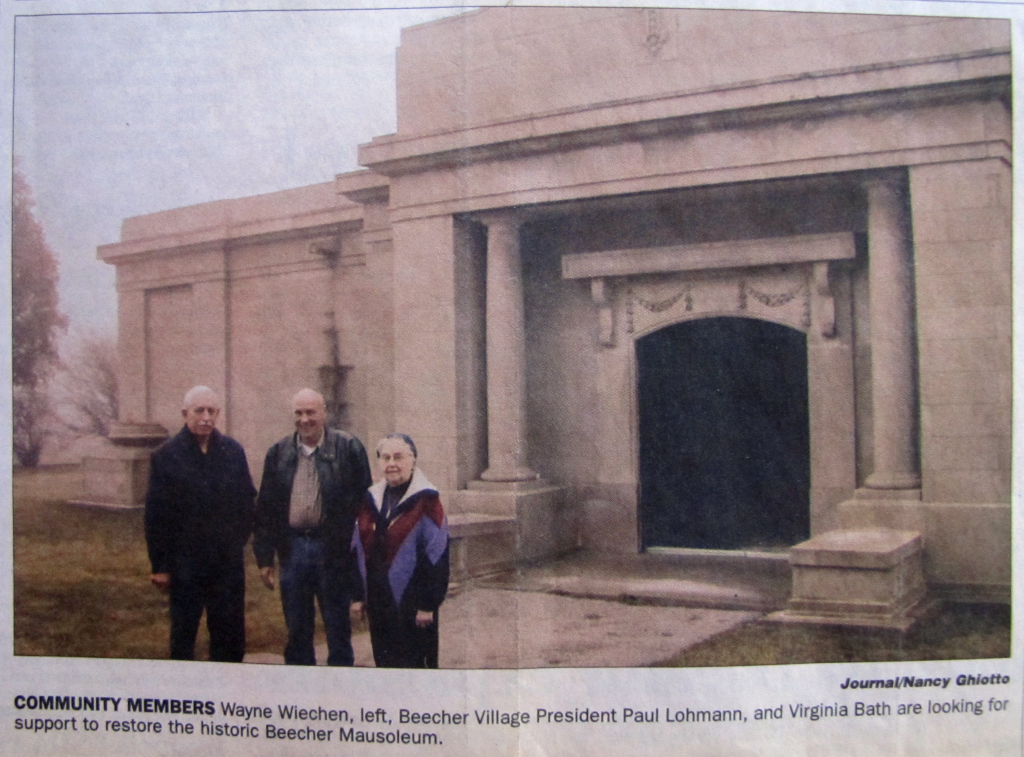 WASHINGTON TOWNSHIP – Once a stately final resting place, the Beecher Mausoleum has since become an abused and deteriorating landmark, – something one woman is fighting to fix.

Sandra Thielman, of Wonder Lake, is working to preserve the burial building from becoming an eyesore and continues to seek volunteers to help with the project.

When on walks through the doorway of the mausoleum, there is a sense of peace and history of whose who buried within the walls of the building. The marble floors, walls of the interior and the ornate cement and stone exterior represent the care ancestor’s took to honor their deceased loved ones and the expense they made to accomplish that goal.

Thielman, herself, has numerous ancestors buried in crypts at the site. Many prominent early citizens of Beecher are there as well.

The construction of the Beecher Mausoleum, a 150-foot-long by 50-foot-wide structure, began in 1912 and was completed in 1913. It was declared a historic landmark in 1998 by the Will County Historic Preservation Commission. The mausoleum is near St. Luke’s Cemetery on the southeast edge of Beecher in unincorporated Washington Township and east of Route 1. Though the mausoleum is adjacent to the cemetery, it’s not affiliated with any church, said Ms. Thielman.

Her quest to preserve the landmark began about seven years ago, after she and her daughter, Christina, went there. She learned that her great-grandfather, Henry Thielman, was responsible for having the historic landmark built.

Henry was a real estate developer who became a resident of Beecher in 1899. Local banker Arthur Struve financed construction of the building and took over management of the mausoleum after Thielman moved to Arkansas.

Struve passed away in 1932, leaving the duties of selling crypts to his daughter, Rosamunda Orr. When she could no longer do the job, she appointed her daughter, Peggy Orr, to take over. 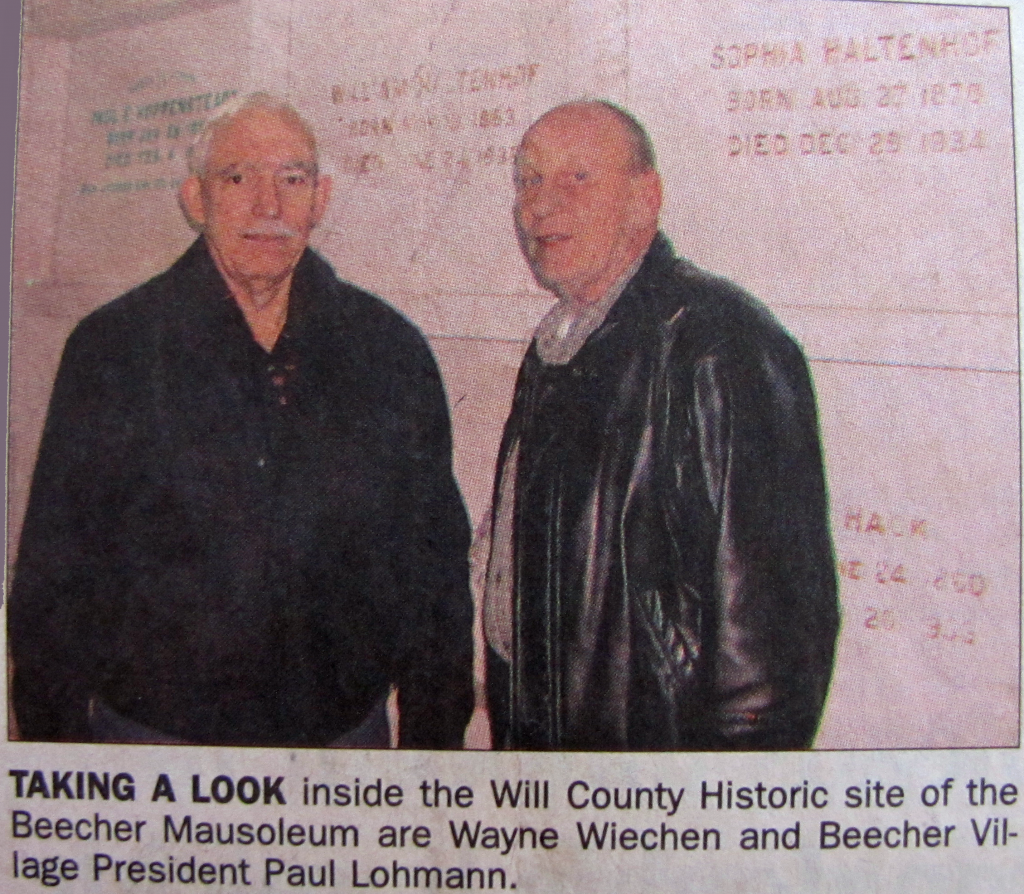 Henry Thielman died in 1947 and was buried at the mausoleum his vision helped create. His wife, Minnie, and nephew, Loren, are also buried there. Sandra’s mother, Dollie Joanne (who died in 1968) is buried at the site as well, along with Thielman’s fraternal grandparents, Walter and Paula.

Ms. Thielman remembers visiting the mausoleum as a child with her grandmother, Paula. Those visits stopped when she later moved to the northern suburbs. Today she lives in Wonder Lake near the Wisconsin border.

Before her grandmother’s death in 2001, she had been working at cleaning up the mausoleum – a long and expensive process.

Funds have been limited and often she would pay some of the expenses herself. She has also spent countless hours researching the historic landmark.

There were no funds for taking perpetual care of the mausoleum,” said Ms. Thielman.

She hopes to continue to investigate the family histories of those buried there.

Ms. Thielman gives credit to local historian, Virginia Bath, who has supplied old newspaper articles containing Beecher’s past history to help locate information on those buried at the site.

As more community members learn about the plight of the historic mausoleum, Ms. Thielman hopes to be able to find out even more about its occupants. One women turns out to be a servant and a past resident of the Kankakee Mental Hospital.

Thielman said it was not uncommon during the 1930’s and ‘40s that those with no money or families were buried at the mausoleum.

Over time, she as a small group of volunteers have raised $16,000 for materials and repairs for the old building, but the damage has been costly.

In the past, vandals have destroyed or damaged much of the inside of the mausoleum. There have been liquor bottles and cigarette burn marks found inside the burial crypt. Beautiful stained glass windows that once adorned the building have now been replaced with glass block. There has been extensive damage to the marble floors and walls from fires set by vandals.

But despite this, some progress has been made.

The building has been power washed, (since there is no water at the mausoleum site it was brought in from the Beseke farm which is close to the burial site), windows have been secured,, the ceiling repainted. Tuck pointing has been done and broken marble panels replaced with wood. The list of restoration needs continues to grow, including repairs for the leaking roof and flashing around the drains.

“The mausoleum was designed and built by some of Beecher’s past citizens. It’s important to keep the structure intact,” said Ms. Thielman.

Grave Matter – Wayne Wiechen, Paul LohmannBeecher resident Wayne Wiechen has helped in the past with maintaining the outside of the mausoleum. For six years he cut the grass and trimmed bushes that surrounded the building.

Often he and his wife, Charlene, would plant flowers in the urns that are on opposite ends in the front of the mausoleum. “We both have relatives who are buried in the mausoleum and in respect of them and the others buried there, we felt it was the right thing to do,” said Wiechen.

Village President Paul Lohmann would like to see a perpetual foundation set up for the maintenance and care of the historic landmark.

“The building is too much of an asset to our community to let it go. We should try to help to maintain it in the proper way,” he said.

A meeting to discuss the future restoration plans will be held at 7 p.m., Jan. 10, 2004, at Washington Township Center, 301 East Indiana Ave., Beecher