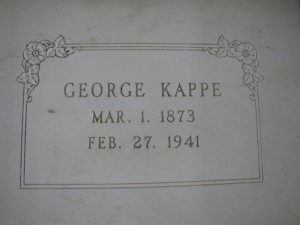 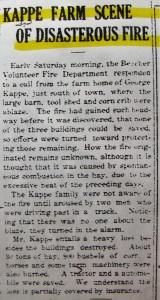 Early Saturday morning, the Beecher Volunteer Fire Department responded to a call from the farm home of George Kappe, just south of town, when the large barn, tool shed and corn crib were ablaze. The fire had gained such headway before it was discovered, that none of the three buildings could be saved, so efforts were turned towards protecting those remaining. How the fire originated remains unknown, although it is thought that is was caused by spontaneous combustion in the hay, due to the excessive heat the preceding days.

George Kappe, a well known and respected citizen of this community, passed away, Thursday morning Feb. 27, at 12:05 o’clock at the Kappe homestead, southeast of the Village.

Mr. Kappe was the son of Henry and Ellen Kappe, nee Beseke, and was born March 1, 1872, near Beecher. He was taken into the family of the children of God through Holy Baptism in St. Paul’s Ev. Lutheran Church, northeast of Beecher, and was later, following a course of thorough religious instruction, confirmed, April 18, 1886, in St. John’s Ev. and Ref. Church, southeast of this village by the late Rev. G. Koch. On March 15, 1899, he was, in the same church and by the same Pastor, united in holy wedlock with miss Minna Ristenpart, which happy union was blessed with four children, of whom one, Erna preceded the father in death, at the age of six days. The surviving children, who with the wife and mother mourn the loss of a true loving husband and father are: Regina, Mrs. Henry Krueger, Clear Lake, Iowa; Henry, Beecher; Harriet, Mrs. Russell Piper, Beecher.

Immediately after marriage, the young couple engaged in farming on the present home site, where their combined labors were signally blessed by God throughout the years. In late years, however, especially during the last two years, there came a fore-warning of abating strength. Still fresh and strong in mind and delighting in work, he sought medical help in the hope of regaining his former robust health. When little or no improvement was felt, he on Feb. 6, upon advice of his doctor, submitted to an operation for double hernia in St. James Hospital. Apparently on the road to recovery and happy to be home again, it soon became evident that all was not well as hoped and prayed for. Although the best of medical attention and untiring loving care was given him, his life slowly ebbed away into peaceful death on the above mentioned date, at the age of 68 years, 11 months and 26 days.

Those who are deeply saddened by his passing are his wife, his children, already mentioned, one daughter-in-law, two sons-in-law, five grandchildren, Warren and Robert Krueger, Geraldine and Carolin Kappe, and Carol Piper; one sister, Mrs. Herman Matthias, Crete; and a host of other relatives and friends.

Funeral services were conducted, Sunday, March 2, beginning at 1:30 p.m., at the residence, and continued at 2:00 o’clock at St. Luke’s Church, where his Pastor, the Rev. G Horst, spoke in both the German and English languages to a large overflowing attendance of relatives and friends. A quartet of ladies of St. Luke’s Senior Choir rendered three appropriate songs. Many beautiful floral pieces artistically designed, gave ample expression of the esteem in which the departed was held by those who knew him best. He was laid to rest in the Beecher Mausoleum.

The departed, a true loving husband and father, always faithfully labored and abundantly provided for his loved ones. As a Christian, he always realized his shortcomings and dependence upon divine grace and could be accounted a true Israelite in whom there was no guile. His uprightness, honesty, fairness and willingness to help and serve wherever help and service was needed, was everywhere recognized and acknowledged. Because of these characteristics he, for more than fifteen years, was a trusted and respected director and president of the Farmers Grain Co. in Beecher. Sharing with all Christians and blessed knowledge of salvation in Christ Jesus, may he now happily realize his Master’s gracious promise: “Because I live, ye shall live also.”

George’s family members also resting in the mausoleum are: