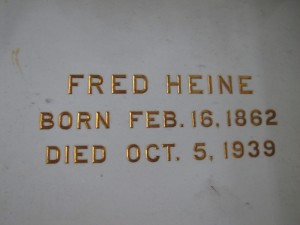 Fred’s father, Frederick Heine, died in May,1866.   Fred’s mother then married Heinrich Niedert on October 18, 1866.  Five children were born to this marriage:

The departed, Henry Frederick Heine, son of Frederick Heine and his wife, Charlotte Meyer, both deceased, was born, February 16, 1862, in Washington Township. The child of christian parents, he was soon after birth, baptized in St. John’s Lutheran Church at Eagle Lake, and later, March 25, 1877, following a course in religious instruction, confirmed by the Rev. E Keuchen in St. John’s Evangelical and Reformed Church, east of Beecher.

Born and raised on a farm, he chose farming as his occupation, staying with his parents until the death of his father and step-father, when together with his mother, he made Beecher his home. Lovingly taking care of his mother in her declining years he, after her death, March 10, 1925, continued a more or less retired life in his acquired home, east of the Dixie Highway. It was his sad lot in life to mourn not only the passing of his parents, but also the departure of his brother, Ernst and his sisters, Mary, Mrs Fred Ackerman, Wells, MN., and Sophie, Mrs Fred Dorfmueller, Steger, IL.

Always blessed with good health until five years ago, when he began to fail in a general way, it was not unexpected when, Sept. 19th, a stroke of apoplexy brought him to death’s door. Although receiving the best medical attention and being tenderly nursed by friends and his sister-in-law, Mrs. Henry Neidert, it was deemed advisable to take him to the St. James Hospital in Chicago Heights, where also for about two weeks everything possible was done to make him comfortable until he peacefully came to the end of his early days, Thursday, Oct. 5, at the age of 77 years, 7 months and 19 days. 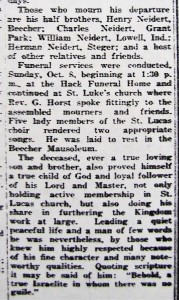 Those who mourn his departure are his half brothers, Henry Neidert, Beecher; Charles Neidert, Grant Park; William Niedert, Lowell, IN; Herman Neidert, Steger; and a host of other relatives and friends.

Funeral services were conducted, Sunday, Oct. 8, beginning at 1:30 p.m. at the Hack Funeral Home and continued at St. Luke’s Church where Rev. G. Horst spoke fittingly to the assembled mourners and friends. Five lady members of the St. Luke’s choir rendered two appropriate songs. He was laid to rest in the Beecher Mausoleum.

The deceased, ever a true loving son and child of God and loyal follower of his Lord and Master, not only holding active membership in St. Luke’s Church, but also doing his share in furthering the Kingdom work at large. Leading a quiet peaceful life and a man of few words he was nevertheless, by those who knew him, highly respected because of his fine character and many noteworthy qualities. Quoting scripture it may be said of him: “Behold a true Israelite in whom there was no guile.”