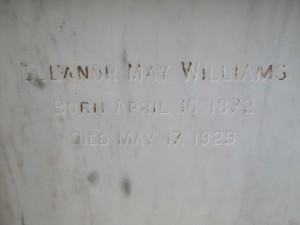 Eleanor May Williams, daughter of Anna and Lacoln (Lacon) Hand, was born April 16, 1872, near Lyons, Wisconsin and died at her home in Crete Friday morning.

She received her early education in a public school at Lyons, later attending the public school at Lake Geneva, Wisconsin from which she graduated. Later she went to teach and study in a private school conducted by an uncle, Professor Jesse Hand.

She had been ill for many years, and for the past few weeks gradually grew worse.

She was a woman of high intelligence and understanding and had been a great aid to her husband’s business for years.

She is survived by her husband, two sons, Jesse Eugene Carter of Rockford, Francis John Fishman, of Iowa, and one daughter, Viola Adeline Fishman, who lives at home; also one granddaughter, Maxine Carter, and two brothers, Jesse and Willis Hand, of Lake Geneva. 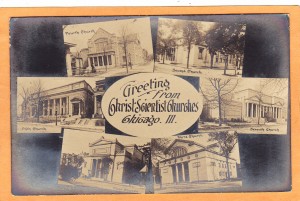 Mr. R.C. Dock, of the First Church of Christ Scientist, Chicago Heights, conducted the funeral services, which were held last Sunday from the Methodist Church. Interment took place in the Mausoleum at Beecher.

Eleanor has no other family members resting in the mausoleum.

(Editor’s note: It is only an assumption, but it may be possible that Eleanor’s husband, Edwin M. Williams, the owner / editor of “The Crete Record” newspaper in Crete, knew Fred Bernard Rohe, Mayor of Crete. Fred Bernard Rohe’s first wife was killed in an auto accident while on vacation in Texas and was brought home and laid to rest in the mausoleum in February, 1929, just a few months before Eleanor died)