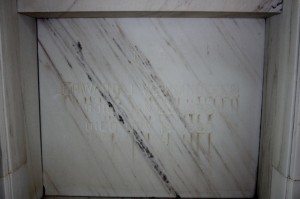 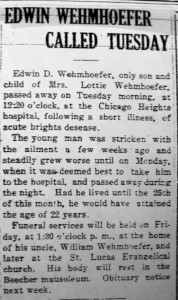 Edwin D. Wehmhoefer, only son and child of Mrs. Lottie Wehmhoefer, passed away on Tuesday morning, at 12:20 o’clock, at the Chicago Heights hospital, following a short illness of acute brights disease.

The  young man was stricken with the ailment a few weeks ago and steadily grew worse until on Monday, when it was deemed best to take him to the hospital, and he passed away during the night. Had he lived until the 25th of this month, he would have attained the age of 22 years.

Funeral services will be held on Friday, at 1:30 o’clock p.m., at the home of his uncle, William Wehmhoefer, and later at the St. Lucas Evangelical Church. His body will rest in the Beecher Mausoleum. Obituary notice next week.

Edwin D. Wehmhoefer was born October 5, 1905, at Beecher, Ill., and in a few days would have attained the age of 22 years. A few years ago his parents moved to Monee on a farm. About seven years ago the father died, leaving the mother and Edwin. Edwin attended the Matteson high school and from that time he has been assisting his uncle, Henry Wehmhoefer, in the hardware business at Beecher. He lived with his mother.

About five weeks ago Edwin became ill, and when the doctor was called, he diagnosed the sickness as Bright’s disease. For a time hope was entertained that he would recover. But on Monday morning a relapse set in. The patient was then taken to the hospital, where he died on Tuesday morning.

Funeral services were held today at Beecher from the residence of his uncle, and then at the church. Rev. Horst, of Beecher, and Rev. Gaebe, of Monee, conducted the services.

Edwin D. Wehmhoefer was born Oct. 25, 1905, at Beecher. When three years old his parents moved to a farm south of Monee. Having graduated from the grade school at Monee and being confirmed at St. Paul’s Church, he afterwards attended the high school at Matteson and later at Harvey.

Since the death of his father, in 1920, the mother made her home in Monee, where she already engaged in nursing, which later became her profession. In 1925, mother and son came to Beecher, where the latter found employment in the hardware establishment of his uncle, Henry Wehmhoefer. Attending strictly to his work, being faithful, courteous and accommodating, he was well liked by all who came in contact with him. About six weeks ago, a treacherous kidney ailment gave reason for worry and alarm, and although given the best of loving care and attention by his mother and attended by the best medical skill obtainable, his condition grew steadily worse, so early on Monday morning it was found advisable to transfer him to the St. James Hospital at Chicago Heights. Here the utmost was done to save his life, but God in his wisdom had decreed otherwise, and called him from this life at 12:20 on Tuesday morning, Oct. 11, at the age of 21 years, 11 months and 16 days.

His remains were brought to William Wehmhoefer’s residence, from where, on Friday, at 1:30, the funeral service was conducted. This service was continued at St. Luke’s Church where Rev. G. Horst spoke in German and Rev. A.B. Baebe, a personal friend of the family, spoke in the American language, both speakers dwelling on the fact that Edwin had lived a clean, exemplary life and showing forth the characteristics of a loving, dutiful son. The large audience and many beautiful floral pieces, attested to the high esteem and regard which Edwin had secured for himself within two years’ stay in our midst. Burial was in the Beecher Mausoleum.

Edwin’s family members also resting in the mausoleum are: