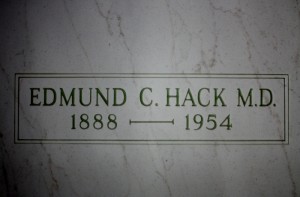 Brother of Albert B. “Pat” Hack.

Two of Beecher’s young men have become full-fledged doctors, having received their “sheepskins” from the Bennett Medical College at Chicago at their graduation on last Monday. Ed. Hack, son of Mr. and Mrs. Henry Hack, and Henry H. Wegert, brother of R.H. Wegert, our tonsorial artist, were the two who were honored. Both young men are well and favorably known, and their many friends will join us in wishing them success in their chosen professional vocation. 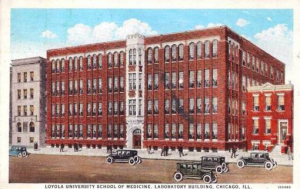 Dr. Wegert has accepted an interne at the West Side Emergancy hospital at Chicago, and Dr. Hack and his college friend Dr. Methrow, who also graduated, Monday, have accepted a like call at the Rockford hospital.

Will Make Their Home in Wisconsin, Where Groom Will Practice

Dr. Edmund C. Hack, son of Mr. and Mrs. Henry Hack of Beecher, was married, Wednesday afternoon, at 3:30 o’clock, to Miss Margaret Schwarz, at 2335 California Avenue, Chicago, Rev. Krohn, a Lutheran pastor, officiating.
The bridesmaids were Miss Marie Deneke of Beecher and Miss Anna Miller of Chicago, and the groom’s attendants were Mr. Ernest Hummer of Chicago and Mr. Albert Hack of Beecher, brother of the groom. Only near relatives and friends were present at the ceremony. Those from here who attended the wedding were Mr. and Mrs. Henry Hack, Mrs. H.F. Thielman, Miss Marie Deneke, Albert Hack and Miss Hilda Tillotson of Crete.
After the ceremony and elaborate wedding, dinner was served and a very pleasant time was had.
The bride is a highly esteemed young lady and has a large circle of friends in her neighborhood in the city.
Our readers are all too well known to the groom for us to comment on his excellent traits. He was born and reared in our midst and is a popular, honorable, ambitious young gentleman. Having recently graduated from the Bennett Medical College at Chicago, he is a full-fledged physician and surgeon, and promises to be a rising young doctor.
Dr. and Mrs. Hack will spend a couple of weeks here at the home of the groom’s parents. In the first week in December they expect to go to their new home at Symco, Waupaca County, Wisconsin, where the doctor will assume an office and begin the practice of his profession.
We join with the many friends in extending congratulations to the newly wedded couple, and wish them success and happiness through life.

Dr. Edmund C. Hack, 66, of 7147 Olcott Avenue, Hammond, Ind. died suddenly early Saturday morning, at St. Margaret’s Hospital there. Although ailing for some time with a heart condition, news of his death came as a shock to relatives and his many friends in this community.

Dr. Hack was born January 13, 1888, at Beecher. A graduate of Valparaiso University and Loyola Medical (Bennett) School, he had been a physician in Hammond for the past 30 years. He was a staff member at St. Margaret’s hospital and a member of the American and Lake County Medical Associations. He was also a member of Beecher Lodge 1087, AF & AM, Orak Shrine and South Bend consistory.

Immediate survivors are his wife, Margaret; three sons, Theodore and Leroy of Hammond and Robert of Indianapolis; one brother, Albert of Beecher, and two granddaughters.

Funeral services were held Tuesday at 1:30 p.m. at the Burns Funeral Home, Hammond, with Rev. Joyce officiating. Interment was in the Beecher Mausoleum.

Edmund’s family members also resting in the mausoleum are: