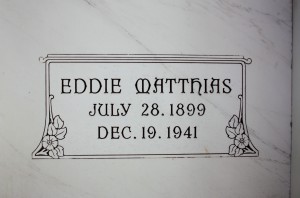 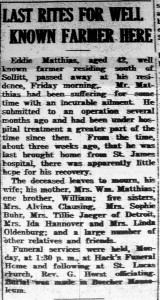 Eddie Matthias, aged 42, well known farmer residing south of Sollitt, passed away at his residence, Friday morning. Mr. Matthias had been suffering for some time with an incurable ailment. He submitted to an operation several months ago and had been under hospital treatment a greater part of the time since then. From the time, about three weeks ago, that he was last brought home from St. James Hospital, there was apparently little hope for his recovery. The deceased leaves to mourn, his wife; his mother, Mrs. William Matthias; one brother, William; five sisters, Mrs. Alvina Clausing, Mrs. Sophia Buhr, Mrs. Tillie Jaeger of Detroit, Mrs. Ida Hannover and Mrs. Linda Oldenburg, and a large number of other relatives and friends.

Funeral services were held, Monday, at 1:30 p.m., at the Hack’s Funeral Home and following at St. Luke’s Church, Rev. G. Horst officiating. Burial was made at the Beecher Mausoleum.

The departed, Mr. Edward Matthias, son of Mr. and Mrs. William Matthies, the former of whom was called into eternal rest, Jan. 11, 1937. Edward was born, July 28, 1899, 2.5 miles west of Beecher. The child of Christian parents, he was soon after birth received into the family of the children of God through the rites of Holy Baptism, performed at St. Paul’s Lutheran Church by the late Rev. Albert Brauer. In addition to a fine home training he was later thoroughly instructed in the great fundamentals of our Christian religion, by Rev. G. Horst and confirmed at St. Luke’s Church with eleven others, April 5, 1914. On November 10, 1926, he was married to Miss Esther Pralle, the ceremony taking place at Kankakee. Immediately after marriage, the young couple started housekeeping and engaged in farming on the groom’s parents’ homestead and later on two other farms southwest of this village. Always active and delighted in his chosen work, he felt about three years ago that a hidden ailment slowly began to sap his strength. 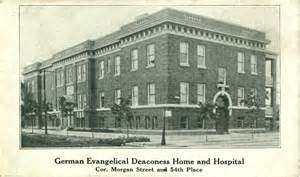 In the hope of regaining his former strength, he on Sept. 29th of this year, consented to an operation in the Evangelical and Reformed Deaconess Hospital at Chicago. Seemingly improved, he returned home on Oct. 21st. Realizing the seriousness of his trouble, however, he again returned to the hospital on Nov. 26th. Fully convinced there was no longer earthly help he, only after a few days returned home and patiently awaited the end of his earthly pilgrimage, which came peacefully, last Friday, Dec. 19th, at 10:30 a.m., at the age of 42 years, 4 months and 21 days.

Funeral services were conducted, Monday, Dec. 22, beginning at 1:30 and continued at St. Luke’s Church, where Rev. G. Horst spoke words of comfort to a large gathering of relatives and friends. Two duets by Mrs. Irvin Albers and Mrs. Harry Fick deepened the impression of the service. A number of beautiful floral pieces attested to the esteem in which the departed was held. He was placed to rest in the Beecher Mausoleum.

The departed, at heart a true loving husband, son, brother and friend, trained in the way of the children of God and through long suffering prepared for the better life, may well have prayed and confessed with David of old. “He weakened my strength in the way; he shortened my days. I said O my God, take me not away in the midst of my days.” Yet having shared with us the blessed knowledge and opportunity of salvation through faith in Christ Jesus, we may well hope and trust that he also belongs to those names that are written in heaven.

Note: You may notice that Eddie’s name is spelled with an “a” in Matthias and his parents’ names are both spelled with an “e” in Matthies. I have found in my research the spelling changes on different documents. I do not know which is correct, nor if there was an error made on their headstones. If you can help confirm the correct spelling, please let us know.