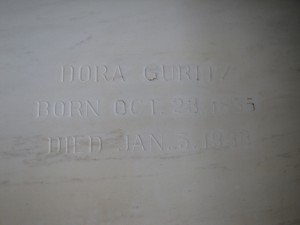 Sister to: Diedrich and Wilhelm Ohlenkamp

After 30 years of successful farming, Mr. and Mrs. Guritz made their home, living quietly and happily for 18 years, until the sudden death of Mr. Guritz on April 8, 1926. Shortly afterwards the departed, persuaded by her children made her home with her daughter, Mary, at Grant Park. Here in the hospitable home of her daughter, visited frequently by her children, she lived a quiet, contented, happy life. Suffering from an incurable sickness which at times caused her considerable pain, she nevertheless remained patient and deeply grateful for the loving care and attention so freely given. 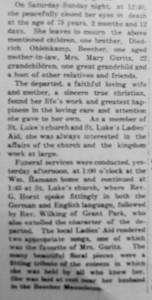 On Saturday-Sunday night, at 12:40, she peacefully closed her eyes in death at the age of 75 years, 2 months and 12 days. She leaves to mourn the above mentioned children, one brother, Diedrich Ohlenkamp, Beecher, one aged mother-in-law, Mrs. Mary Guritz, 22 grandchildren, one great grandchild and a host of other relatives and friends.

The departed, a faithful loving wife and mother, a sincere true Christian, found her life’s work and greatest happiness in the loving care and attention she gave to her own. As a member of St. Luke’s Church and St. Luke’s Ladies Aid, she was always interested in the affairs of the church and the kingdom work at large.

Funeral services were conducted, yesterday afternoon, at 1:00 o’clock at the Wm. Hamann home and continued at 1:45 at St. Luke’s Church, where Rev. G. Horst spoke fittingly in both the German and English language, followed by Rev. Wilking of Grant Park, who also extolled the character of the departed. The local Ladies Aid rendered two appropriate songs, one of which was the favorite of Mrs. Guritz. The many beautiful floral pieces were a fitting tribute of the esteem in which she was held by all who knew her. She was laid to rest near her husband in the Beecher Mausoleum.