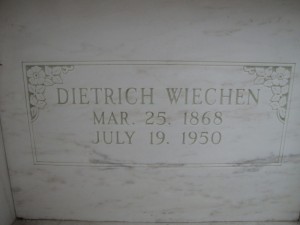 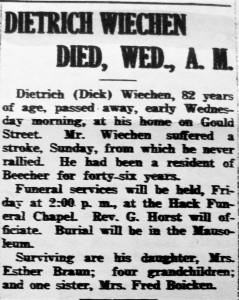 Dietrich (Dick) Wiechen, 82 years of age, passed away, early Wednesday morning, at his home on Gould Street. Mr. Wiechen suffered a stroke, Sunday, from which he never rallied. He had been a resident of Beecher for forty-six years.

Funeral services will be held, Friday at 2:00 p.m., at the Hack Funeral Chapel. Rev. G. Horst will officiate. Burial will be in the Mausoleum.

The departed, Dietrich Wiechen, son of Henry and Sophia nee Engelke Wiechen, both deceased, was born on a farm in Will Township near Peotone, March 25, 1868. Baptized in early infancy, he was later, following a course of religious instruction, confirmed with others in Zion Lutheran Church near Sollitt, April 2, 1882, by the last Rev. A Wangerin. He was united in holy wedlock with Louise Klusmeyer, Sept. 2, 1894, the Rev. A. Wangerin performing the ceremony. This happy union was blessed with two children, Harry and Esther, of whom Harry, preceded the father in death, April 29, 1933, leaving only Esther, Mrs. Rudolph Braun, to deeply mourn the passing of a kind, loving father. Immediately after marriage, the young couple engaged in or continued farming until 1914, at which time they moved into their beautiful home on north Gould Street in Beecher. Still in the best of health and ever active, he became a member of the Wilke Lumber and Coal firm. Retiring from this and yet feeling the urge for work, he for some years took over the janitor-ship of the public school. 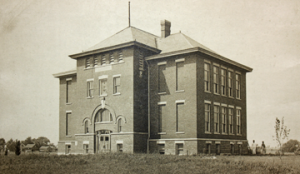 Ten years ago, however, he suffered a paralytic stroke from which he never completely recovered to gain his former health. More or less bound to his home, but always up and around again and frequent attacks of minor ills, he, on Sunday, July 16, at 4:45 p.m. suffered a severe heart attack from which he showed no signs of recovery although everything known to medical science and loving care was done.  His peaceful end came, Wednesday, July 19, at 4:45 a.m. at the ripe age of 82 years, 3 months and 8 days.

He leaves to mourn his passing his only daughter and son-in-law, Mr. and Mrs. Rudolph Braun; one daughter-in-law, Irene, Mrs. Harry Wiechen; four grandchildren, Richard and Joyce Wiechen, and Marilyn and Harry Braun; one sister, Louise, Mrs. Fred Boicken; one sister-in-law, Mrs. Fred Wiechen; and a host of other relatives and friends.

Funeral services were conducted, Friday, July 21, at 2:00 p.m. at the Hack Funeral Home where Rev. G. Horst spoke comforting words to a large gathering of relatives and friends.  A quartet of Mrs. Vernon Huenerberg, Mrs. Hilda Boysen, Mrs. Mary Ostermeyer and Miss Carolyn Kappe, sang four appropriate songs, accompanied by Mrs. Marge Hunte. Beautiful floral pieces attested to the esteem in which Mr. Wiechen was held by all who knew him. He was laid to rest in the Beecher Mausoleum.

The departed, ever a kind, loving husband and father, lived a clean, upright Christian life in all sincerity and truth the present ways of life never influencing him to the extent of doubting or wavering in his Christian faith and hope. The Bible was and remained to him the spoken word of God, the revelation of God as his heavenly Father through faith in his Lord and Savior Jesus Christ. Thus we may trust and hope that he is now realizing the certain blessed truth of his confirmation verse — Romans 8. v18: “For I reckon that the suffering of this present time are not worthy to be compared with the glory which shall be revealed in us.”

Dietrich’s family members also resting in the mausoleum are: