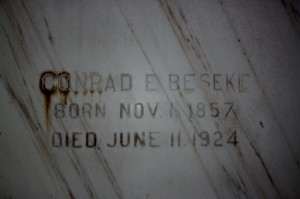 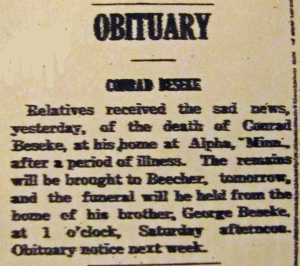 Relatives received the sad news yesterday, of the death of Conrad Beseke, at his home at Alpha, Minn., after a period of illness. The remains will be brought to Beecher, tomorrow, and the funeral will be held from the home of his brother, George Beseke, at 1 o’clock Saturday afternoon. Obituary notice next week.

Conrad Beseke, son of Carl Beseke and Lora, nee Wagner, was born Nov. 7, 1857, at Beecher. He grew to manhood here, and was married to Ellen Langreder, Feb. 1890. This union was blessed with four children, one dying in infancy. The surviving children are: Elsie, (Mrs. Earl C. Starnes) of London Mills, IL, Amanda (Mrs. Fred Ziems), Crete and Washington of Alpha, MN. On January 19, 1898, the wife preceded him in death, and having lived in and near Beecher until 1904, he made his home at Alpha, MN. About three months ago he became the victim of a treacherous throat disease, which in spite of the best medical skill and the best of loving care at the home of his son, Washington, led to his death on Wednesday morning, June 11, at the age of 66 years, 7 months and 4 days.

His remains were brought to Beecher on Friday night and taken to the home of his brother, George, from where the following day, (Saturday), after a brief service in the home, the body was taken to St. Luke’s Church, where Rev. G. Horst spoke in the German and English languages, impressing upon the minds of all hearers the necessity and importance of ever journeying toward the promised land of faith. Interment was at the Beecher Mausoleum.

Those mourning Mr. Beseke’s departure besides the children are: Three brothers, Carl and George, Beecher, and Henry of Alpha, MN; one sister, Mrs. Lena Kirchhoff of Sollitt; nine grandchildren and a large host of other relatives and friends.