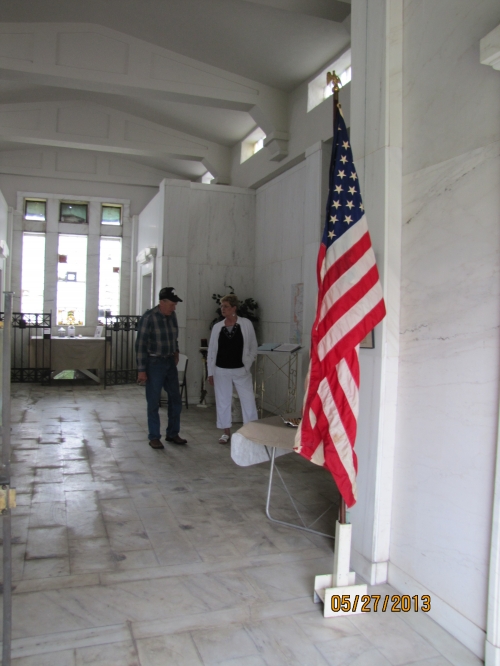 For the Beecher Mausoleum’s first Memorial Day open house, Sandra Thielman, a 17-year advocate and president of the board overseeing the building’s restoration, couldn’t be more pleased.

“It warmed my heart to see all the people walk through the building,” Thielman said. “I noticed some reading the material on display that told about the lives of the people buried inside. Some stood in quiet contemplation. Still others remembered the mausoleum as part of their childhood.”

IMG_2051Thielman reported that approximately 100 people attended the two-day event designed to honor the mausoleum’s veterans. At least 11 veterans of World Wars I and II, as well as at least one known veteran of the Civil War, Joseph Cloidt, is laid to rest inside the mausoleum. Cloidt also is believed to have served as President Abraham Lincoln’s body guard at the time Lincoln gave the Gettysburg address. At least two others may have served in the Civil War and two others in WWI and WWII also, but their past service has not yet been confirmed.

IMG_2054 croppedThe event re-introduced the historic mausoleum to the residents of Beecher, some of whom are descendants of those interred there. Others who came to pay their respects are new residents of Beecher, who had no idea that such a storied building was tucked away in the nether reaches of the community.

The event raised $1,195 in donations, which will go toward the ongoing restoration project.
The most pressing needs are the materials necessary to be used by the roofers, masons, and carpenters unions that have volunteered to help with the project. Work is scheduled to commence this summer.

“We were fortunate that these labor unions have agreed to use our project as a training ground for their apprentices,” Thielman explained. “I am especially grateful to Will County Board Member Bob Howard, who helped secure their assistance. She added that there is no shortage of work that needs to be done to return the building to its former glory.

Thielman was grateful for those who came to visit. One woman said she remembered the stained glass windows, windows that have long been broken. Thielman says that when funds are available, a likeness of the original windows will be created by an artisan. Bullet-proof glass will be installed on the exterior to protect them from vandalism, an act that has plagued the building in the past.

Of those who came by, Thielman was moved by one young man, she estimated to be about 18 years old, who wanted to know specifically where the U.S. Marines were entombed. She showed him while he snapped pictures on his cell phone of the plaques bearing their names and information about their service displayed on the shelves of their crypts. He told her he would be joining the Marines in three weeks.

The open house also produced a visit by Chris Geisler, a retired art teacher from Thornton, and her brother Tom Vandemerkt, a retired Com-Ed worker from Frankfort. The two call themselves Taphophiles, meaning they are old cemetery enthusiasts. The two volunteered to take care of the lawn maintenance at the mausoleum for the entire summer.

—Much of the information about the construction of the mausoleum, Architect Cecil E. Bryan, as well as historical newspaper articles contained in this web site can now be viewed inside the Beecher Mausoleum while touring the building.