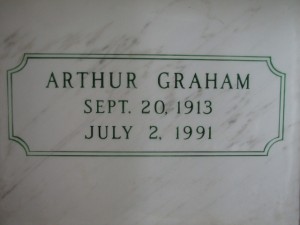 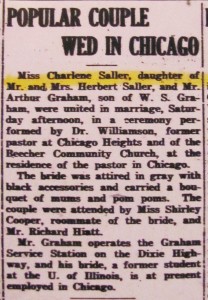 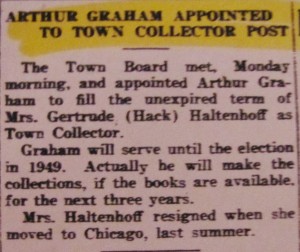 The Town Board met, Monday morning, and appointed Arthur Graham to fill the unexpired term of Mrs. Gertrude (Hack) Haltenhoff as Town Collector.
Graham will serve until the election in 1949. Actually he will make the collections, if the books are available for the next three years.
Mrs. Haltenhoff resigned when she moved to Chicago, last summer.

Village Trustee Graham, since the discovery of the historic marker, site of the old Hubbard Trail, now known as the Dixie Highway, has in process of preparation an article or perhaps a series of articles touching on this historic trail. This will also include the trail known as the Ox Trail, which was in use long before the survey was run for the present Dixie Highway and which passed through approximately 20 rods west of the present highway. This, on the north side of the village, would be between the residences of Dr. H.H. Hiatt and Wm. Wiggenhauser. It crossed Indiana Street at a point where the present Catalpa Street is located. The trail wound its way through the prairie to Vincennes, Ind.
This article or series will appear in the Herald as soon as sufficient data has been collected. Anyone having any information on this old Hubbard Trail is kindly requested to get in touch with Mr. Graham. He will be glad to receive it and use it if possible.
Graham is also contemplating another project, the complete history of Beecher, which would be a valuable work, and would probably be coveted by many local citizens.

Editor’s note: no historical articles written by Arthur have been found to date

Editor’s note: 1965  Art worked hard for the improvement of the Beecher Community. He donated his personal labor to help install the two tennis courts in 1965 and offered the use of his private family in-ground swimming pool to give the Beecher community’s children swimming lessons. The swimming lessons were taught by his two daughters, Nancy and Sue, along with Yvonne Squire. 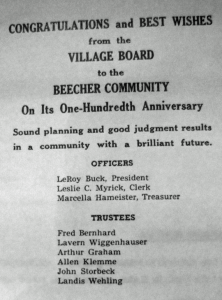 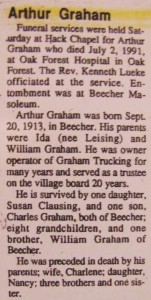 Funeral services were held Saturday at Hack Chapel for Arthur Graham who died July 2, 1991, at Oak Forest Hospital in Oak Forest. The Rev. Kenneth Lueke officiated at the service. Entombment was at Beecher Mausoleum.

Arthur Graham was born Sept. 20, 1913, in Beecher. His parents were Ida (nee Leising) and William Graham. He was the owner operator of Graham Trucking for many years and served as trustee on the village board 20 years.

He is survived by one daughter, Susan Clausing, and one son Charles Graham, both of Beecher, eight grandchildren, and one brother, William Graham of Beecher.

He was preceded in death by his parents; wife, Charlene; daughter, Nancy; three brothers and one sister.