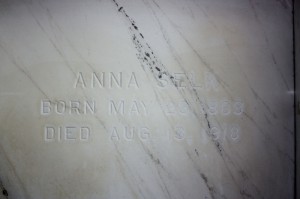 Can you help identify Anna’s parents and adopted parents and possibly confirm the year of her birth, 1869 or 1870?

Mrs. William Selk entered into the everlasting sleep at her home at 7:05 o’clock, Tuesday morning, aged 48 years, 2 months and 20 days.

Deceased was born May 23, 1870, in Holstein, Germany. At the age of one and one half years (1871-1872) she came to America with her parents, settling on a farm in Yellowhead Township, near Petersburg, where her mother died shortly afterwards. She was adopted by Mr. and Mrs. Henry Blank and reared to womanhood. In February 1889, she was married to William Selk, and the couple lived on a farm near Sollitt. In 1904, they moved to Beecher, where Mr. Selk embarked in business. Six years later they decided to return to farming and moved to a farm near Grant Park, and later to a farm on the county line, five miles west of Sollitt, the present home. To this union six children were born, as follows: William, Ernest, Clara (Mrs. Ed Schultz), Arthur, Edmund and Viola.

The funeral will be held tomorrow at 12 o’clock from the home and later at the St. Luke’s Evangelical Church, Beecher. Rev. Zimmerman of Grant Park officiating. Interment will be in the Beecher Mausoleum.

The many friends extend heartfelt sympathy to the grief-stricken relatives, in which the Beecher Herald joins.

(Editor’s note:  We’d like to mention here that it was Mr. & Mrs. Selk who donated the property that is now Cemetery Road that leads to St. Luke’s Cemetery and the Beecher Mausoleum. Thank you, Mr. & Mrs. Selk, for you generous and giving hearts)