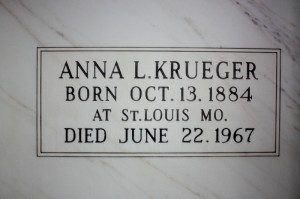 We cannot confirm Anna’s parentage or family. The only information we’ve found are her parents’ names on her U.S. Social Security death claims index.

We do not have Anna Krueger’s obituary, but this is what we know so far:

(Editor’s note:  Anna and her husband August moved into the home of Carl Vagt after the death of Mrs. Vagt in 1932 and lovingly took care of Mr. Vagt. The Vagt home was on Penfield Street in Beecher)

No other family members are with the Kruegers. August bought the two crypts in 1944.