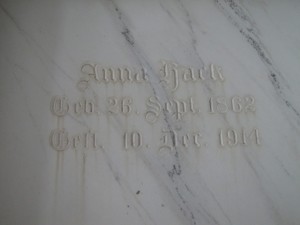 Mother of Rose W. (Asa James Dunlap) Hack, and one daughter who passed away the day of her birth.

The community was shocked, yesterday, to learn of the death of Mrs. Carl Hack, which occurred, Wednesday evening at the Chicago Heights hospital, following a surgical operation performed Monday morning. Greater was the shock owing to the fact that but a few of her friends here knew of her dangerous illness.

The remains will be brought to Beecher, Sunday morning, and the funeral will be held at the Evangelical St. Lucas at 12:00 o’clock noon, Rev. G. Horst officiating, Further obituary notice next week.

One of the largest funerals in the history of St. Lucas Church was that of Mrs. Carl Hack on last Sunday. In spite of a near blizzard prevailing, a throng of sorrowing relatives and friends came from far and near to pay their last respects to the departed.

As we briefly mentioned in last week’s Beecher Herald, Mrs. Hack’s death occurred Wednesday evening of last week at St. James Hospital at Chicago Heights, following an operation performed the previous Monday. The remains were brought to Beecher, Sunday morning, and were taken to the home of Henry Hack, The funeral took place at 1 o’clock at the Evangelical St. Lucas Church. Rev. G. Horst officiated and delivered comforting sermons in German and English. The Frauen Verein, of which Mrs. Hack was a member, attended in a body and sang two appropriate selections.

The remains were conveyed to the Beecher Mausoleum, where after a short service, they were consigned to their last resting place. This was the first funeral to take place in the mausoleum since its completion, and many of the vast throng who witnessed this modern method of burial were very favorably impressed.

Anna Dorothea Hack, nee Schroeder, was born Sept. 26, 1862, at Schlesswig, Holstein, Germany. In 1864, she came to American with her mother. On April 9,1876, she was confirmed in St. John’s Evangelical Church by Rev. Keuchen. In January, 1894 she was married to Carl Hack by Rev. Koch. Two daughters were born, one passing away on the day of birth, and Rose, who with her father, survives. From 1894 to 1914 the family lived at Beecher. Nov. 1, last, they moved to Chicago Heights. Besides the bereaved husband and daughter, she leaves one sister, Mrs. Sophia Haltenhof of Chicago, a large number of relatives and many friends. Her age was 52 years, 2 months and 14 days.

Mrs. Hack was a kind and loving wife and mother, a good Christian, and an obliging neighbor. She will be greatly missed by those with whom she daily associated.