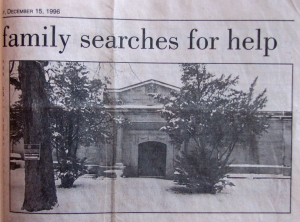 Set about two football fields east of Route 1, at the south end of Beecher, the dreary structure doesn’t attract much, if any attention from the passing motorists.

In fact, a person drives down the narrow gravel road that leads to it, the two nearby homes or the adjacent St. Luck’s cemetery for a purpose. Otherwise, it’s easy to zip right by.

Probably when it was built in 1913, the building received praise for its grandeur. Today it’s known as the Beecher Mausoleum, a building in disgraceful condition.

But, Sandra Lee Thielman, 40, wants to change all that.

“I promised my grandmother (93 year old) Paula Thielman) she’d be buried there, “Thielman says. “I promised on Thanksgiving Day.”

Thielman explains that the family owns five empty crypts as part of a 10-unit vault in the 210-crypt mausoleum. Five family members already lie there, including her mother and her great-grandfather Henry Thielman, who was instrumental in getting the mausoleum built.

Thielman herself wishes to be buried there, next to her mother.

A resident of Wonder Lake, a small town six miles from the Wisconsin border, Thielman left Beecher 28 years ago and returned for the first time this past October. She was astonished at the condition of the mausoleum.

“I literally was physically ill from what I saw.” Thielman says. “I couldn’t sleep for days and days after that.”

She returned with a crew of seven, including her 19-year-old daughter Christina Lee, to remove the piles of debris that had collected there. She cut away the brush that overran the outside.

She paid a skilled carpenter to repair the windows and roof as best he could. Her project cost her $250.

“I don’t know what has gone on there.” Thielman says. “It looked like fires were set in there. The repairs are just Band-Aids.”

The two black metal doors, each donned by a long, thin, brown tone cross are no competition for a curios visitor. They no longer lock nor shut completely closed. The dirt stained white marble walls and floor, as well as the glass block windows, some of which are broken, brighten the interior, which makes a visitor forget that the building has no electricity.

It’s possible to ignore the pile of marble pieces occupying one corner or the ceiling where peeling paint looks like rows and rows of attached white disks.

“Morally I feel it’s my responsibility to take care of my family heritage,” Thielman says. “I want to save this building and manage it for the rest of my life.”

Thielman’s goal centers on contacting all the descendants of those buried in the mausoleum and soliciting donations to restore it. Although a mausoleum bank account exists, it contains only a few hundred dollars.

References in the past records indicate that crypt owners were responsible for maintenance, but no endowed perpetual care fund exists.

“It’s built like a castle,” Thielman says. “It’s constructed to stand for 1,000 years. I am going to find all these people. I will get them to understand that the building will be condemned, and we will be asked to get our family members out of there, so we either do something now or do it later.”

Thielman estimates the refurbishing cost will be from $25,000-$50,000. “There’s no one person holding a checkbook,” she says. “I will find people and make them aware of the conditions there.”

William Saller of Beecher, who has several relatives buried in the mausoleum, including his mother, Dorothy, who died in 1992, supports Thielman in her efforts to restore the building.

“I think it’s very important that something be done,” he says. “It doesn’t need a lot of maintenance. It’s just been let go. The basic structure is very good. Nobody was ever there to take care of it. Nobody’s in charge. It needs somebody to take care of it and keep it up.”

Robert Williamson of Beecher witnessed the degeneration of the mausoleum when he was sexton at St. Luke’s Cemetery.

“The concept was good, but there’s not much interest in it,” Williamson says. “Everybody knows it’s going to cost money, the heirs aren’t here.”

Jean Ohlendorf of Beecher also has several relatives buried there. “It was a lovely spot at one time,” she says. “There was a problem with vandalism. For a while it was a hang-out for young people with no connection to those buried there.”

A “No Trespassing” sign is nailed to a maple tree in front of the mausoleum. “Private Property, Keep Out” signs are attached to three side walls.

Ohlendorf repeats what others say about the firm construction of the mausoleum.

“The building is not going to fall down,” she says. “The problem is the leaky roof and the broken windows. It can be (fixed), but I don’t know if (Thielman) will find all the people whose relatives are there.”

“I am going to track down the descendants of every single person in that building,” Thielman says.

“I am not willing to allow this building to be condemned. We’re going to put this building back in place and bury my grandma there.”

The First Community Bank and Trust in Beecher has agreed to record donations for the mausoleum and keep track of the account.

“I would say it’s sad, and it would be nice to have something done (about the mausoleum),” Barbara Hodgett, the cashier at the bank says. “I don’t know what the answer is.”

Thielman encourages those interested in learning more about the restoration of the mausoleum to call her at 1-(815) 728-8318. Donations can be sent to Hodgett at the bank in Beecher.

“I’ll do as much as I can to raise the funds,” Thielman says. “My family deserves better.”