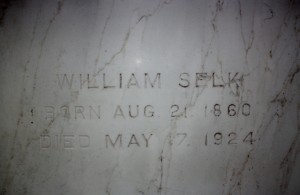 William Selk, son of Carl and Lisetta Selk, was born Aug. 21, 1860, at Downers Grove. When at the age of 8 years he came with his parents to a farm near Sollitt. On Feb. 10, 1886 he was married to Miss Anna Thiede at Chicago, Rev. Klein officiating. To this union was born 6 children – four sons and two daughters: William, Jr., Ernest, Clara (Mrs. Ed Schultz), Arthur, Edmund of Grant Park and Viola (Mrs. William Ahrens). After a few years on a farm east of Beecher, the deceased in 1909 made this village his home. From here he again took up farming on a farm near Peotone, where in 1918 his faithful wife and loving mother of his children preceded him in death. After this loss he again decided to quit farming and, together with his daughter, Viola, made Beecher his permanent home.

Not quite well since the previous fall, he nevertheless, against the wishes of his children and orders of his doctor, kept at work until two weeks prior to his death, when he suffered a collapse. He continued to fail rapidly and although the best medical skill and attentive nursing on the part of the children was given him, he passed away at 5:30 am, Saturday, at the age of 63 years, 8 months and 26 days.

Those mourning his loss in addition to the children already mentioned are three brothers, Henry and John of Beecher and Fred of Chili, Wisconsin; one sister, Mrs. Sophie Thiesen of Grant Park; twelve grandchildren, and a host of other relatives and friends.

Mr. Selk always proved himself a dutiful and loving husband and father, endeavoring at all times to prove worthy of his calling as a Christian and as a member of St. Luke’s Church, and will be missed by many who have found in him a true friend.

Funeral services were conducted on Tuesday afternoon at 1 o’clock at the house and continued at St. Luke’s Church, which was filled to overflowing with relatives and friends who came to pay their last respects to the departed. Rev. G. Horst officiated in both the German and English language and spoke most fittingly of the good traits of the deceased. Interment was in the Beecher Mausoleum, where also Mrs. Selk lays at rest.

(Editor’s note: We’d like to mention here that it was Mr. & Mrs. Selk who donated the property that is now Cemetery Road that leads to St. Luke’s Cemetery and the Beecher Mausoleum. Thank you, Mr. & Mrs. Selk, for you generous and giving hearts)