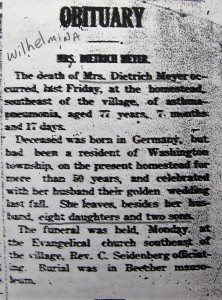 The death of Mrs. Dietrich (correction: Diedrich) Meyer occurred last Friday, at the homestead, southeast of the village, of asthma-pneumonia, aged 77 years, 7 months and 17 days.

The deceased was born in Germany, but had been a resident of Washington Township, on the present homestead for more than 50 years, and celebrated with her husband their golden wedding last fall. She leaves, beside her husband, eight daughters and two sons.

The funeral was held, Monday at the Evangelical church southeast of the village, Rev. C. Seidenberg officiating. Burial was in the Beecher Mausoleum.

(Editor’s note: Wilhelmina immigrated in 1867, according to the 1920 census, the same year as her husband Diedrich.  We don’t know if they came to America together or if they met in America) 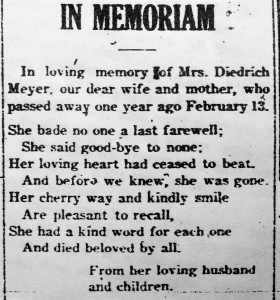 In loving memory of Mrs. Diedrich Meyer, our dear wife and mother, who passed away one year ago February 13.

She bade no one a last farewell;      She said good-bye to none;
Her loving heart had ceased to beat. And before we knew, she was gone.
Her cheery way and kindly smile. Are pleasant to recall. She had a kind word for each one. And died beloved by all.
From her loving husband and children.

Wilhelmina’s family members also resting in the mausoleum are: