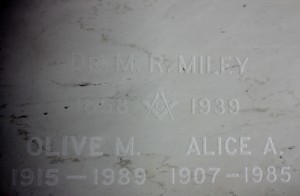 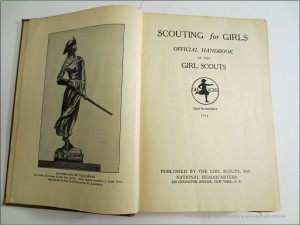 Girl Scout patrols one and two held a meeting at the home of Captain Myrick Wednesday evening at 7:30. The principal business transacted was the election of officers for the ensuing year. The new officers are listed below.

Instead of holding joint meetings as heretofore, the two patrols will now meet on alternate Fridays.

We do not have Olive’s obituary, but what we do know is:

Olive was born and raised in Beecher, IL 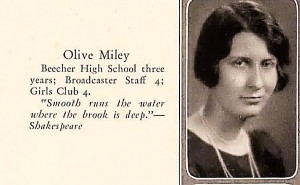 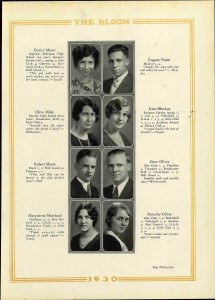 Olive is in the middle row, 4th from the right

In the 1930 census, she was living at home with Dr. Miley, Anna & Bernice, attending school, with no occupation. 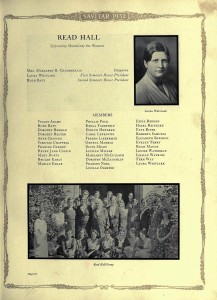 In 1932, she may have attended the University of Missouri, Columbia, MO, Read Hall. (unconfirmed; we can only find one reference to an Olive Miley and can’t confirm by a good photo)

In the 1940 census, Olive is listed as living with Anna in Beecher, working as a laundry maid, National Park.

On Aug. 22, 1953, the Beecher Herald reported that “Miss Olive Miley of Chicago spent a few days recently with her mother, Mrs. Anna Miley, who has been ill.” (this would have been in Beecher) 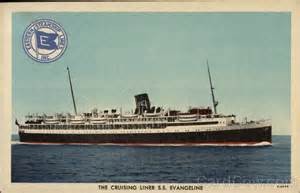 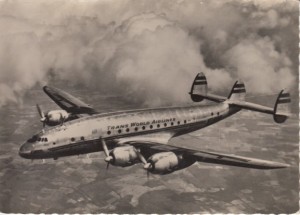 In May of 1957, Olive traveled to London, England via Trans World Airlines.

In May of 1958, Alice & Olive took a cruise together to Miami, San Juan, Puerto Rico and St. Thomas, Virgin Islands.

We do know that Olive eventually moved to California to live with her sister Alice.

Neither sister ever married

Olive’s family members also resting in the mausoleum are: