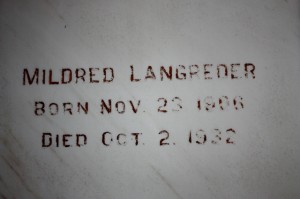 Half sister to: Clara and Walter (Alda L. White) Langreder

Donald M. Borrows, 5847 South Michigan Avenue, Chicago, who was visiting at the Langreder home, two miles south of Beecher, was loading an old fashioned 22-caliber rifle, when it was accidentally discharged, the bullet striking at the base of the skull and passing nearly through the head. Borrows was outside the house at the time, the bullet going through the kitchen screen door and striking the young woman, who was sitting on a couch, surrounded by members of the family, who were but inches beside her.

Dr. Van Voorhis was summoned and ordered the patient taken to the hospital, where she passed away two hours later.

The funeral was held at the home, yesterday afternoon, and burial was in the Beecher Mausoleum.

Mildred’s family members also resting in the mausoleum are: