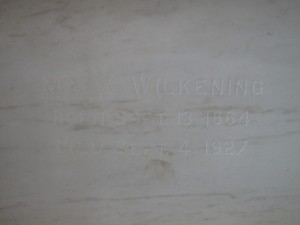 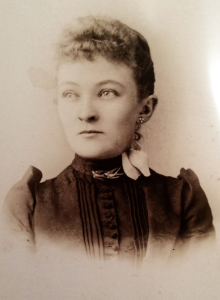 Trips After Returning For Bunch of Keys She Forgot

(Editor’s note: the same article below was originally published in the Star, but the copy we have is  unreadable)

A bunch of keys which she had forgotten in an upstairs room at her home, 81  W Hickory Street,  led to the death Sunday night of Mrs. Mary Wilkening, 63 years old. Mrs. Wilkening had gone upstairs to make a telephone call and had returned to the first floor, only to discover that she had left her keys in an upper room. After she had gone to secure them, she stumbled at the top of the stairs and fell down the entire flight of stairs, dying in 20 minutes of a skull fracture.

There were no witnesses, and it is not known how the accident happened. Mrs. Nelly Scully, who resided on an upper floor, heard the fall and found Mrs. Wilkening apparently already dead at the foot of the stairs. Police were summoned immediately and a physician was called, but death had already occurred when they arrived.

Mrs. Wilkening was the widow of Henry C. Wilkening, who died seven months ago.  She came to Chicago Heights 11 years ago and had lived here continuously since that time. Mr. Wilkening had been employed as a janitor at the First National bank for a number of years,  but had been retired for five years prior to his death.

An inquest was held this morning at the Spindler-Koelling undertaking rooms. – Tuesday’s Chicago Heights Star.

Mrs. Wilkening was a sister of Gerhard Sr., William and Alfred Wehling and Mrs. Henry Wehmhoefer of Beecher and Henry Wehling of Chicago Heights. She is also survived by three sons, Robert and Walter of Chicago and Edwin of Gibson City.

Funeral services were conducted, yesterday afternoon, at 1:30 at the house and at 2 o’clock at St. Paul’s Lutheran Church, Chicago Heights.

Maria’s “Mary’s” family members also resting in the mausoleum are:

One thought on “MARY WILKENING”