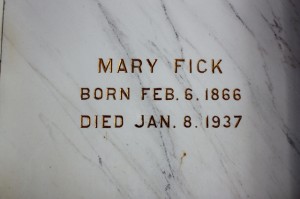 The departed, Mrs. Louis Fick, nee Maria Heldt, daughter of William and Hannah Heldt, both deceased, was born, Feb. 6, 1866, at Downers Grove.  The child of Christian parents, she was soon after birth received into the larger family of the children of God through the holy rite of Baptism.  When her parents, a few years later, located near Beecher and became affiliated with the St. John’s Church, she received the religious instruction and was confirmed in that church by the Rev. E. Keuchen, March 21, 1880.  On October 25, 1888, she was also married in the same church to Mr. Louis Fick, Rev. G Koch officiating.  This happy union was blessed with three children, one of whom a boy, died shortly after birth.  The surviving children, who with their father deeply mourn the passing of a loving wife and mother, are Emma, Mrs. John Lange; and Amanda, Mrs. Ben Johnson, both near and in Beecher.  Immediately after their marriage, the young couple engaged in farming on the county line, about 3 ½ miles southeast of Beecher.  After twenty seven years of successful farming, they acquired and made their home on the southeastern edge of town, adjoining the Dixie Highway.

Not quite well in late years, the intensive heat of last summer aggravated her real trouble to such an extent that she was unable to perform her household duties.  Given the best of medical care and every loving attention on the part of her husband and children, she, at times seemed to rally but not sufficient to give any hope for recovery.  Even so, her sudden end, Friday morning, at six o’clock, came as a distinct shock to her loved ones and a large circle of friends in and near Beecher.  The days of her earthly sojourn number 71 years, 11 months and 2 days.

Those who deeply mourn her passing are the husband, the two daughters and sons-in-law, already mentioned; one grandchild, Leonard Lange; one sister, Mrs. Wm. Klemme, Hanover Township, Ind.; four brothers, Charles, Herman, John, near Beecher, and Emil, Oelwein, Ia.; and a large host of other relatives and friends.

Funeral services were conducted, Sunday, beginning at 1:30 at the house and continued at St. Luke’s Church at 1:50, where her pastor, Rev. G. Horst, spoke fitting words of comfort in both the German and English languages.  The members of St. Luke’s Ladies Aid, in which organization the deceased held membership, rendered two appropriate songs.  Beautiful floral pieces and a very large gathering of friends testified to the high esteem in which the departed was held by all who knew her.  She was laid to rest in the Beecher Mausoleum.

As a wife and mother, the departed gave gladly, freely and fully of her love, strength and time to her loved ones and always delighted in serving all who entered her friendly, hospitable home.  As a child of God she loved his Word and the place where his glory dwelleth, and found much inspiration in attending divine services.  As a former member of St. Luke’s Ladies’ Aid, she was ever Kingdom minded and gladly contributed her share of the blessings received.  Well knowing that her earthly days were numbered she together with her husband, only last Sunday, partook of the Lord’s Supper.  In bidding her farewell, we may comfort ourselves in the thought and hope that she is forever realizing her Saviour’s promise: “I go to prepare a place for you, etc. John 14.