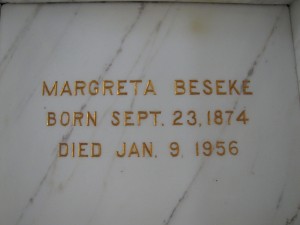 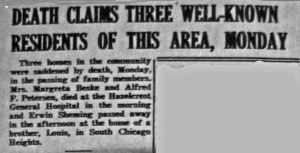 Three homes in the community were saddened by death, Monday, in the passing of family members. Mrs. Margreta Beseke and Alfred F. Petersen died at the Hazelcrest General Hospital in the morning and Erwin Scheming passed away in the afternoon at the home of a brother, Louis, in South Chicago Heights.

Mrs. Margreta Tobeck, Beseke was born in Washington Township on September 23, 1874. She was baptized on October 11, 1874. She was confirmed in the Christian faith on March 25, 1888 in St. Paul’s Lutheran Church near Beecher. Her confirmation verse was II Corinthians 12:9, “He said unto me, My grace is sufficient for you, for My power is made perfect in weakness.”

On February 15, 1894 she was united in marriage to Charles Beseke. Seven children came to bless this marriage. The couple were engaged in farming south of Beecher for a number of years. In 1928 the family moved to Beecher.

Mrs. Beseke was in failing health for the past several years due to advanced age. In December 1954 she was was hospitalized after a fall in her home. After dismissal from the hospital she spent several months in convalescence at the home of her daughter in Crete. However, she did not fully regain her strength. She returned to her home in Beecher in July. Her health began to fail rapidly in November, and on December 23 she was taken to Hazelcrest Hospital where she passed from this life on Monday morning, January 9. Her family gave her the best of care and provided constant companionship which was a source of great comfort to her in her last illness. She was 81 years, 3 months, and 16 days of age at the time of her passing. She was a member of St. Luke’s Evangelical and Reformed Church.

Margreta’s family members also resting in the mausoleum are: