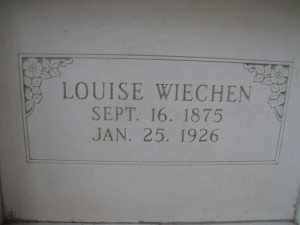 German parentage unknown.
She immigrated to the USA in May, 1891 with friends.

END CAME AT THE HOSPITAL AT CHICAGO HEIGHTS ON MONDAY MORNING 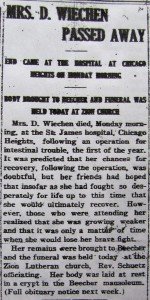 Mrs. D. Wiechen died, Monday morning, at the St. James Hospital, Chicago Heights, following an operation for intestinal trouble, the first of the year. It was predicted that her chances for recovery, following the operation, was doubtful, but her friends had hoped that insofar as she had fought so desperately for life up to this time that she would ultimately recover. However, those who were attending her realized that she was growing weaker and that it was only a matter of time when she would lose her brave fight.

Her remains were brought  to Beecher and the funeral was held today at the Zion Lutheran Church, Rev. Schuetz officiating. Her body was laid at rest in a crypt in the Beecher Mausoleum. (Full obituary next week.)

Louise Wiechen, nee Klusmeyer, was born in Hanover, Germany, Sept. 16, 1875. She was baptized in infancy and confirmed at the age of 14 years. In May 1891, she came to America at the age of 16 years old with friends, after which she worked in this vicinity for a short time. Then she was employed in Englewood until Sept. 2, 1894, when she entered into marriage with Dietrich Wiechen. The ceremony took place at the Lutheran church at Sollitt. Rev. Wangerin officiating. They resided on a farm for nine years in Will Township, after which they moved to Beecher, where they have made their home since. Two children were born to this union: Harry, of Chicago, and Miss Esther of Beecher. She leaves to mourn her loss, husband, one son and one daughter, a daughter-in-law and two grand children, Richard and Joyce, and her mother, step-father and a half sister in Germany.

Mrs. Wiechen was taken very sick on New Years and submitted to an operation of intestinal trouble at the hospital at Chicago Heights, from which she succumbed on Monday, January 25, and the funeral was held last Thursday at the Zion Lutheran Church, the remains being laid at rest in the Beecher Mausoleum.

The deceased was a loving and devoted wife and mother and a highly esteemed lady in the community. Always devoted to her family and home, she also shared her friendship with her neighbors. She was a lady of kindly disposition, having a smile for everyone and never spoke ill of friend or enemy. Up to a few years ago she was an active church worker and for nineteen years president of the Zion Lutheran Frauenverein, which society she helped organize. During the time of her official career in the society, she spared no time or efforts in her labors and was responsible in a large measure for the success of the organization.

In the passing of Mrs. Wiechen the family has lost a most loving and devoted wife and mother, and her many acquaintances a cheerful and true friend.

The large circle of friends join with the Beecher Herald in extending profound sympathy to the sorrowing relatives.