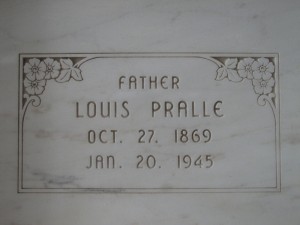 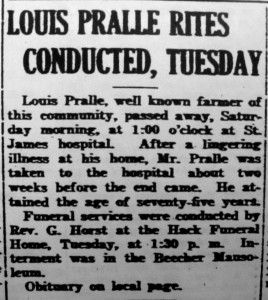 Louis Pralle, well known farmer of this community, passed away, Saturday morning, at 1:00 o’clock at St. James Hospital. After a lingering illness at his home, Mr. Pralle was taken to the hospital about two weeks before the end came.

Funeral services were conducted by Rev. G. Horst at the Hack Funeral Home, Tuesday, at 1:30 p.m. Interment was in the Beecher Mausoleum.

The departed, John Henry Louis Pralle, son of Henry and Wilhelmina nee Stradtmann, Pralle. both deceased, was born Oct. 27, 1869, on the Pralle homestead, 2 miles southeast of this village. On February 20, 1870, he was baptized in St. John’s Evangelical and Reformed Church by Rev. F.G. Reinecke and thus received into the family of the children of God. Following instruction in the great fundamentals of our Christian religion, he was confirmed with a class of 28 in the above mentioned church by Rev. G. Koch.

On October 18, 1897, he was united in holy wedlock with Miss Minnie Mausehund, which union had six children, of whom one, in infancy, preceded the father in death. The surviving children, who mourn the passing of a kind and loving father, are: William, Beecher, Esther, Mrs. Rueben Lankanau, Peotone; Lydia, Chicago Heights; Leo and Alice, Beecher.

Immediately after marriage, the young couple settled on the old Pralle homestead where both of them occupied themselves diligently in the various arduous tasks of farming and were signally blessed in their efforts. On November 12, 1942, the shadows of death closed in on the family in the passing of the loving wife and mother. Continuing on the farm with his children, the departed, gradually failing in health, which two weeks ago took a decided turn for the worse, consented to be taken to St. James Hospital, Chicago Heights, where in spite of the best of medical skill and nursing he peacefully came to the end of his pilgrimage on Saturday, January 20, at 2:00 a.m., at the age of 75 years, 2 months and 23 days.

He leaves to mourn his passing, the children already mentioned, two sisters, Mrs. Lena Ballascher, Chicago Heights and Mrs. Louisa Seitz of Beecher; two brothers, August and William, both of Peotone; one daughter-in-law, one son-in-law, two grandchildren, three sisters-in-law, one brother-in-law, and a host of other relatives and friends.

Funeral services were conducted, Tuesday, at 1:30 p.m., at the Hack Funeral Home, where Rev. G. Horst spoke fittingly to a large gathering of relatives and friends. A duet by Mrs. Harry Fick and pastor was rendered with Mrs. Henry Meeter as accompanist on the piano. A memorial wreath and beautiful floral pieces spoke well in memory of the departed. He was laid to rest in the Beecher Mausoleum.

The deceased, in spite of much affliction, possessed a kind, generous heart, which not only expanded itself as to his loved ones, but also readily responded whenever called upon by friends and neighbors. As a lifelong member of St. Luke’s congregation, he was never appealed to in vain towards the upkeep of his church and the building of the kingdom of God at large. Thus having shared with us the blessed knowledge of our Christian religion, its exhortations, promises, may he now experience, as we all some day hope to experience, the abundant grace of God.