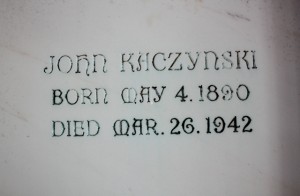 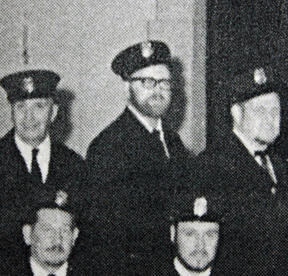 (Editor’s note: We know Scholiasika, aka Tillie, departed Copenhagen, Kobenhavn, Denmark on May 2, 1928 and arrived in Halifax, Nova Scotia, Canada on May 12, 1928.
On June 20, 1928, Scholiasika and John crossed the border into Detriot as a married couple, destined for Chicago, IL)

John Kaczynski, a Lithuanian by birth, who came to America in 1914 at the age of 28 years (correction, 24 years), was unexpectedly called out of this life, Thursday, March 26, 1942 at 12:30 p.m. at his home at Sollitt. Not quite well, yet without alarming symptoms, his departure deeply shocked his loved ones as well as those who had learned to know and esteem him. His funeral was held, Monday, March 30 at 2 p.m., at the Hack Funeral Home with Rev. G Horst officiating. The following trio: Mrs. Herman Seitz, Mrs. Ervin Albers and Mrs. George Ostermeyer, rendered two appropriate songs, and a lady friend of the family sang two numbers, one in Lithuanian for the many Lithuanian friends of the bereaved family present. The funeral, largely attended, and the beautiful floral pieces gave evidence of the esteem in which the departed was held.

Interment was made in the Beecher Mausoleum, where the above mentioned singer again sang in both English and Lithuanian.

He leaves to mourn, his wife Tillie, nee Butvilaite, one son John; one sister-in-law, Mary Kaczynski: one brother-in-law and sister-in-law, Mr. and Mrs. Ddimidos, and family; and many other relatives and friends. 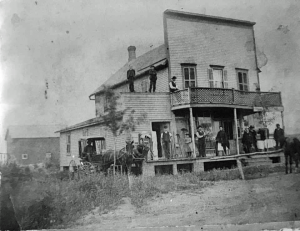 Sollitt Tap, unknown if this is the same building John owned, can you help?

As a tavern operator in Sollitt for a number of years, John was well known and respected among local business men. His shrewd business ability and upright and aggressive tactics were an asset to the community. He was probably the pioneer of the popular night softball games in this vicinity when he erected the first lighting plant in this area in Sollitt some years ago.

(Editor’s note) I found the photo to the left on Facebook, I am not sure if it is the same building John used to own or not. Can you help ?

John also served on the Beecher volunteer Fire Department. The most valuable of the civic organizations in Beecher, it is also the oldest organized group in Beecher.

John’s son, John Kaczynski, Jr. owned the “Farmers Inn” on Gould Street. It was formerly known as “Up the Street Bar.”

One thought on “JOHN KACZYNSKI”