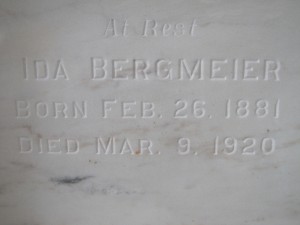 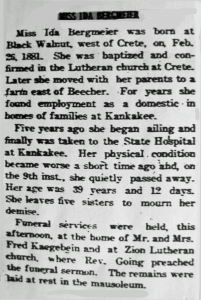 Miss Ida Bergmeier was born at Black Walnut, west of Crete, on Feb. 26, 1881. She was baptized and confirmed in the Lutheran Church at Crete. Later she moved with her parents to a farm east of Beecher. For years she found employment as a domestic in homes of families at Kankakee.

Five years ago she began ailing and finally was taken to the State Hospital at Kankakee. Her physical condition became worse a short time ago, and on the 9th she quietly passed away. Her age was 39 years and 12 days. She leaves five sisters to mourn her demise. (Editor’s Note: 4 sisters & 1 brother)

Funeral services were held this afternoon at the home of Mr. and Mrs. Fred Kaegebein and at Zion Lutheran Church, where Rev. Going preached the funeral sermon. The remains were laid at rest in the mausoleum. 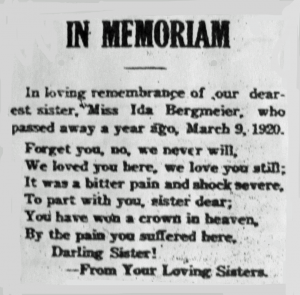 In loving remembrance of our dearest sister, Miss Ida Bergmeier, who passed away a year ago March 9, 1920.

Forget you, no, we never will,
We loved you here, we love you still,
It was a bitter pain and shock severe, To part with you, sister dear,
You have won a crown in heaven,
By the pain you suffered here.
Darling Sister!
— From Your Loving Sisters.