Stop by for a visit – The Mausoleum will be OPEN
Information, tours will be available 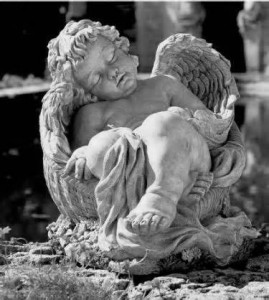 This sleeping cherub concrete statue has been generously donated by the Guardian Angels, the not-for-profit organization overseeing the Beecher Mausoleum restoration project.

It will be raffled off to a lucky ticket-holder at Beecher’s July 4th celebration. Winner need not be present to win.

Tickets were available at the Township Center, Village Hall, Hack Funeral Home, First Community Bank, and on June 15th at Fireman’s park and at the mausoleum during Drivin’ the Dixie.

Watch for Guardian Angels’ booth at Fireman’s Park on the Fourth of July
For more information, contact Sandra@beechermausoleum.org

Driving Directions
From Fireman’s park to the Beecher Mausoleum

Dr. Miley and his daughters in his 1909 Mertz Runabout
“The doctor was always interested in any new mode of transportation and when the invention of the automobile was announced, he was one of the first to order a Metz Runabout in 1909.

There were no such firms as garages and so he ordered the 14 separate packages, each costing about $25. Completely constructed automobiles were not available, and so the put-it-together-yourself kits were sold.

Dr. Miley read the instruction carefully and produced his car; however, he missed one important instruction. The chain that propelled the vehicle was installed backwards and, when the doctor started the car, it would only go in reverse.

Fritz Hinze, the town constable, told him: “You can’t go backing around Beecher. That’s against the law. Don’t see why you bought one of them new-fangled things. They will never be accepted by the people.��?

The doctor re-read the instructions and put the chain in correctly… spinning around town at three miles per hour.