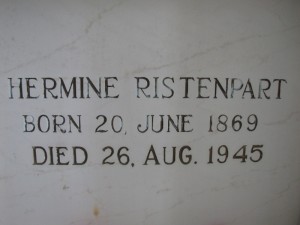 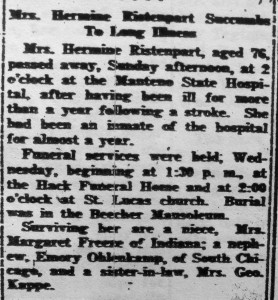 Mrs. Hermine Ristenpart, aged 76, passed away, Sunday afternoon, at 2 o’clock at the Manteno State Hospital, after having been ill for more than a year following a stroke. She had been an inmate of the hospital for almost a year.

Funeral services were held, Wednesday, beginning at 1:30 p.m., at the Hack Funeral Home and at 2:00 o’clock at St. Lucas Church. Burial was in the Beecher Mausoleum.

Surviving are a niece, Mrs. Margaret Frese of Indiana; a nephew, Emery Ohlenkamp, of South Chicago, and a sister-in-law, Mrs. Geo. Kappe.

Mrs. William Hermine (nee Danne) Ristenpart was born, June 20, 1869, in Washington Township, the daughter of the late Henry and Minnie Danne. Baptized, October 3, 1869, she was later, following her instruction in the great fundamentals of our Christian religion, confirmed in St. John’s Ev. & Reformed Church, April 1, 1883. On March 25th, 1894 she was united in holy wedlock with William Ristenpart, the ceremony taking place in the above mentioned church, with the late Rev. G. Koch officiating.

This union, although not blessed with children, was always a happy partnership of two loving, loyal hearts.

For the first fifteen years of their married life, the young couple lived on the Danne homestead, five miles south-west of Beecher, from where they came to Beecher, establishing their home in our community. On May 25, 1933, her husband was called to his eternal rest. Loyal to the memory of her departed husband, she carried on in Christian fortitude until May, 1944, when a paralytic stroke necessitated her removal to our Evangelical Hospital at Chicago. Somewhat regaining her strength, she was graciously taken into the home of her nephew, Emory Ohlenkamp, at South Chicago, who, together with his wife, accorded her tender loving care. Considerably stronger, she returned to her home in Beecher, but even though she was given the best of care here on the part of Mrs. Miley and Miss Miller and neighbors, it was soon found necessary for her niece, Margaret,(Mrs. Ernest Frese), to take her into her home. But here again, in spite of loving care and attention, her condition became such that in the later part of September 1944, she had to be removed to the Manteno State Hospital for treatment and care. Showing little improvement at first, she, at the beginning of this year, gradually began to regain her health. It was the impression of all who visited her regularly, an impression shared by twenty ladies, who in late July, called upon her and had her out for luncheon, that she might eventually fully recover, but when on August 23, she was unexpectedly stricken by another stroke resulting in coma, all hope for recovery vanished. She peacefully came to her death, Sunday, August 26, at 2:00 p.m., at the age of 76 years, 2 months and 6 days.

She leaves to mourn her departure, a nephew, Emory Ohlenkamp; one niece, Margaret, Mrs. Ernest Frese; two brothers-in-law; two sisters-in-law; and may other relatives and friends.

Funeral services were conducted, Wednesday, August 29, beginning at 1:30 p.m., at the Hack Funeral Home and continued at 2:00 o’clock at St. Luke’s Church where her pastor Rev. G. Horst, spoke fittingly to a large attendance of relatives and friends. A duet composed of Mrs. Henry Meeter and Mrs. Irvin Albers, accompanied by Mrs. Rose Hunte, rendered three appropriate songs. Many beautiful floral pieces evidenced the high esteem of her relatives and friends. Interment was made in the Beecher Mausoleum.

The departed, who together with her late husband, held membership in St. Luke’s Church, as also for many years in the Women’s Guild, and up to her death in the Women’s Guild Auxiliary, was ever true to her Christian upbringing, proving herself a loving wife, a loyal Christian, a faithful attendant at divine service, a helpful, dependable friend and neighbor. May she richly experience the promise of God as contained in His Holy Word, “And God shall wipe away all the tears from their eyes and there shall be no more death, neither sorrow or crying, neither shall there be any more pain; for the former things are passed away.” Rev. 21, vs 3-4

Hermine’s family members also resting in the mausoleum are: