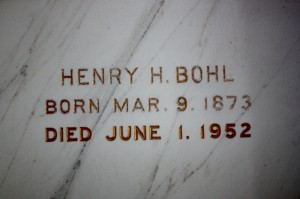 Henry Bohl, 79, a native of Washington Township and resident of Beecher for the past twenty-six years, passed away at the Hazelcrest General Hospital following a week’s confinement, late Sunday afternoon.

Funeral services will be conducted by Rev. Edwin Otte, Thursday, June 5, at 1:30 p.m., in the Hack Chapel and following at St. Luke’s Evangelical and Reformed Church . Burial will be in the Mausoleum.

Surviving are his wife Sophie; one brother, John, of Grant Park; and numerous nieces and nephews.

Henry Helmuth William Ernest Christ Bohl, son of Henry and Minnie Bohl, was born on the Bohl homestead in Washington Township, March 9, 1873. He was confirmed in the Christian faith, April 3, 1887, at St. John’s Evangelical Church of Beecher by Pastor Gustav Koch. On February 9, 1898, Mr. Bohl was united in marriage to Miss Sophie Blievernicht. The couple enjoyed many years of happy married life. In 1948, they observed their 50th wedding anniversary. They lived on the Bohl homestead for 28 years, moving to Beecher in 1927.

Mr. Bohl became ill May 23rd. He was taken to the Hazelcrest Hospital and submitted to an operation, May 26th. Due to advanced age, he failed to gain strength and was called from this life, Sunday, June 1, at 5:30 p.m. He is survived by his wife and 23 nephews and 14 nieces.

Mr. Bohl was well and favorably known in this community. He was faithful to the vows taken at his confirmation and was an active member of his church throughout his lifetime. He was a member of St. John’s Church of Beecher for many years. He served as trustee for 12.5 years. On moving to Beecher, he joined the St. Luke’s Evangelical and Reformed Church in 1928. He was a regular in attendance and sincere in the profession of his faith. In Revelation 2:10, we find a passage which is a fitting commentary on his life and faith, “Be thou faithful unto death and I will give thee a crown of life.”

Editor’s notes: Henry’s father Heinrich Sr. lived with Henry & Sophie from the time of their marriage to the time of his death in 1921.