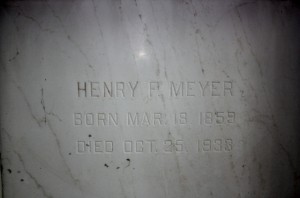 Father to: Heinrich, Augusta and Harry H. Meyer
(Editor’s note: Heinrich and Augusta both died in infancy; only Harry grew to adulthood)

The death of Henry Meyer occurred at the Chicago Heights hospital, Tuesday, at about midnight. Death was caused by a complication of ailments. Mr. Meyer was 72 years of age and had been living in retirement since moving to the village some years ago. Funeral services, it is understood will be conducted, Saturday, by Rev. C Nauerth at St. John’s Church, and burial will be in the mausoleum.

Henry F. Meyer was born in the neighborhood of Beecher, March 18, 1859, to Claus Meyer and his wife Dorothy, nee Lemke. He entered in holy wedlock with Mrs. Melsina Engelking, July 18, 1906. Three children were born to this union, of whom, two died in infancy; one son, Harry, survives to mourn his loss. There are also two stepsons, Carl and Fred Engelking, and a stepdaughter, Mrs. Sophia Fahrenkopf, with their families. His wife and a stepdaughter, Mrs. Emil Dierking, preceded him in death two years ago. Others mourners are two sisters and one brother. He had been living on a farm east of Beecher for most of his life with the exception of the years from 1903-1914, when the family lived in Harvey. On account of the failing health of Mrs. Meyer and his own physical ailments the family moved to town about four and one half years ago. This change improved his health greatly while the illness of his wife developed into great seriousness. Recently his old ailment appeared and quickly developed into “uremia”. He was taken to the hospital, Monday afternoon in much pain. He passed away, Wednesday morning, at 12:25 p.m. at the age of 74 years, 7 months and 7 days.

The funeral services took place, Saturday, at St. John’s Evangelical Church of which he was a member. Burial was made in the mausoleum.

Mr. Meyer was one of our pioneer citizens, who by his steady, aggressive toil and upright character had won the esteem of the whole community.